It’s time to share the Smash Bros. tea, in a very literal way. 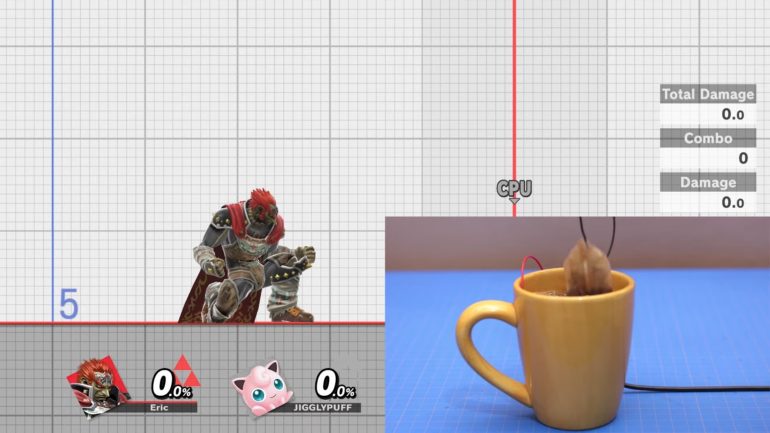 After seeing just how obnoxious some players could be when abusing taunts in previous titles, Nintendo completely removed the option to use any character’s signature taunts during online play in Super Smash Bros. Ultimate.

But competitive players quickly found a work-around that has become the universal gaming taunt when other options have dried up: teabagging. And now, a content creator known for making weird objects into controllers for various video games made a way to teabag with a literal teabag.

Insert Controller Here is a YouTube channel that’s shown builds for controllers using a mini-basketball hoop, a can of Spam, and now, an actual teabag. In the video, he shows a simple mug, some wires connected to a microcontroller board, and a teabag with wires attached to it.

Whenever the teabag is dunked into the water, an electrical current is sent through the wires, making the character squat down in game. This action is held for however long the teabag is touching the liquid. For faster movements, all you have to do is briefly touch the liquid with the controller and then remove it without letting it soak.

The teabag in use within the main demonstration is a standard black tea blend, but ICH notes that replacing it with a more herbal blend will provide a more pleasant aroma while you’re gaming. But ICH also cautions users to carefully read the recommended brew times to avoid oversteeping the tea.

On top of using the actual drink as a way to humiliate his opponents, ICH actually found a more practical and just as impressive second way to perform gaming’s “sacred squatting motion.” Using an ultrasonic sensor, he placed it into another cup and mapped the controls to recognize his movements as motion controls. This allowed him to place the cup and sensor underneath him while playing, so if he performed the motion himself during gameplay, his character in the game would mirror it.

This is just one of the many controllers ICH has built and shared with his viewers on his YouTube channel. He even has a free, in-depth guide on how to get started on building your own controllers called Beginner’s Guide to Arduino Game Controllers.

If you want to take your trolling to the next level in Smash Ultimate, just build one of these and pick King Dedede online. It can’t get much better (or worse) than that.