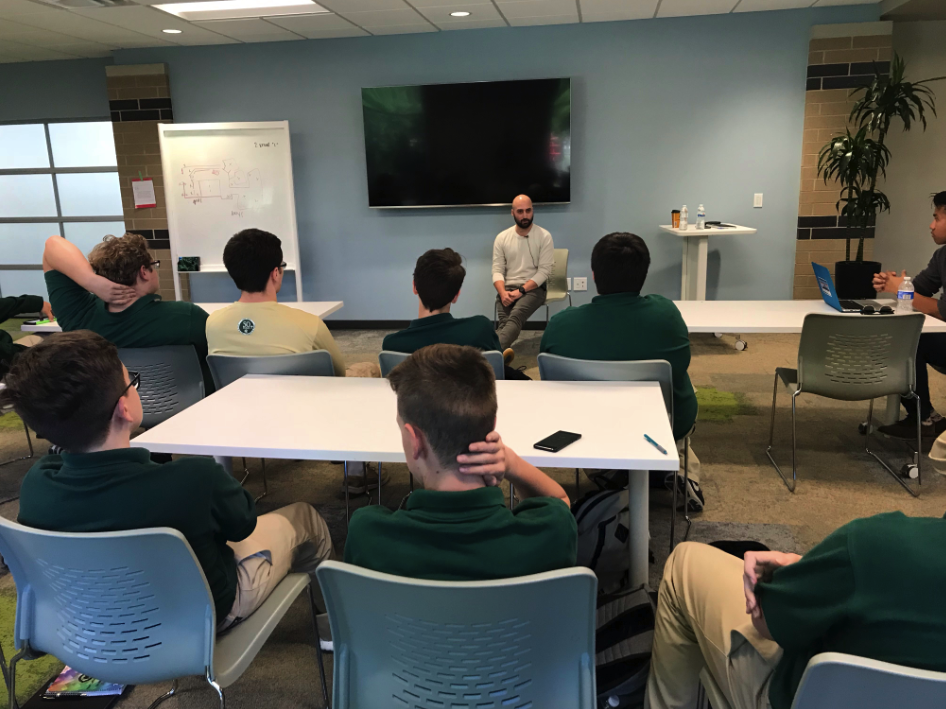 After being on the road for months in destinations like Stockholm, London, and Istanbul, Jason “Moses” O’Toole arrived home in Grand Rapids, MI to take a month-long break from Counter-Strike esports.

During Moses’ break, West Catholic High School director of marketing Adam Antor invited him to speak to the school’s esports club. Despite being fatigued from consistently traveling the world for work, Moses accepted.

Antor founded the school’s esports club last January after months of discussion with students and school faculty, and now it’s a blooming esports program. They’re a part of the newly popularized High School Esports League (HSEL), which contains hundreds of schools across the U.S. and in Canada. West Catholic is going up against some of the best prospects in almost every popular esports game like League of Legends, CS:GO, Overwatch, Dota 2, Fortnite, and Rocket League.

At the high school level, students form teams and compete against other esports clubs and programs from their local areas, similar to traditional sports. West Catholic’s Rocket League team, for instance, beat a team from Grand Valley State University, a school whose esports club is developing into a powerhouse for competitive play in Western Michigan. This phenomena, where schools compete in an organized fashion like traditional sports, is happening in many other surrounding high schools in the area as well, meaning one thing. High school and college esports are becoming the new grassroots of esports.

“The barriers of entry are very low [in high school esports],” Adam Antor told Dot Esports. “The big thing is just organizing the kids who are already playing in a competitive space… It’s so much fun competing against schools across the country.”

For Moses, there was one story that was easily relatable for the students: that of MIBR’s Jake “Stewie2k” Yip. His meteoric rise to stardom is a dream for many esports hopefuls.

Stewie2k’s story follows a narrative that’s all too common in esports—parents not approving of their child’s gaming aspirations during their secondary school years. But in Stewie2k’s particular case, he risked hurting both his grades and family relationships to join Cloud9 in place of widely popular in-game leader Sean “sgares” Gares. When his signing was announced in January 2016, he and the organization faced community and professional backlash because of his rookie-like reputation as an online, pick-up game star who hadn’t proved himself internationally.

“Don’t be afraid if you have a decision to make like Stewie2k.” Moses told to the students. “Everyone thought he was going to fail, be awful, and that he didn’t deserve [to go pro]. He took the biggest risks out of any CS player to get to where he is today.” Two years later, Stewie2k is the highest earning star in North America, with a Valve Major championship title under his belt.

Stewie2k skipped school on numerous occasions so that he could accrue practice hours in CS:GO and make it into the big leagues alongside many of the esports stars. To prevent this for students wanting to follow the same path as Stewie2k, esports programs and clubs become the ideal space to teach them a balance between investing time in their schooling and in their dreams.

Bridging the Gap Between Education and Esports

There are three potential reasons for the increased involvement of schools in esports, according to Moses: to help students find their niche social groups, to keep them engaged outside the learning process, and to ensure student safety on the internet.

He believes these driving factors are a bit “cynical,” but it’s not necessarily a bad thing for schools to be indirectly involved in the lives of their students. At the same time, more and more colleges are beginning to scout talent in high schools for potential scholarships and participation in esports programs, similar to how the NCAA functions in traditional varsity sports.

“[We have students] being actively recruited by colleges right now,” Adam Antor said. “When I tell anyone that, their mouths just drop. It’s crazy. Colleges are offering anywhere between $4,000 [in scholarships] to a half-ride (half-tuition scholarship) in esports. We visited Trine University last spring, and the spaces and money that’s being invested at the college level right now is really exciting.” At the moment, Trine boasts “one of the best esports facilities” in the U.S., according to ESPN.

Moses’ father is also an educator, teaching at West Catholic and at another local private school, Aquinas College, which also has a growing esports program. Mr. O’Toole didn’t expect his son to be an esports star at a young age, but Moses proved him wrong. He’s now a prominent voice in CS:GO, with some of the most recognizable commentaries, analyses, and desk segments in all of esports.

“Esports has it all,” Moses told the students. “You gotta translate love of video games into something else. Get involved with the silly things. You can turn esports communities into whatever you want. [You] don’t have to feel that esports isn’t a sport. It doesn’t matter. We’re selling out arenas. So find what you want to do in esports.”

The next generation of esports aficionados reside in high schools and colleges around the world. Esports dreams start at a young age, so encouragement and empowerment are key factors that’ll help drive new blood towards gaming-related horizons—whether it be pro players, on-air talent, or behind-the-scenes professionals. A lot of that responsibility rests on schools to help students attain their esports dreams, but ultimately industry leaders like Moses can inspire adolescents to do the work themselves. The next Stewie2k or Moses, after all, is likely in a classroom right now.