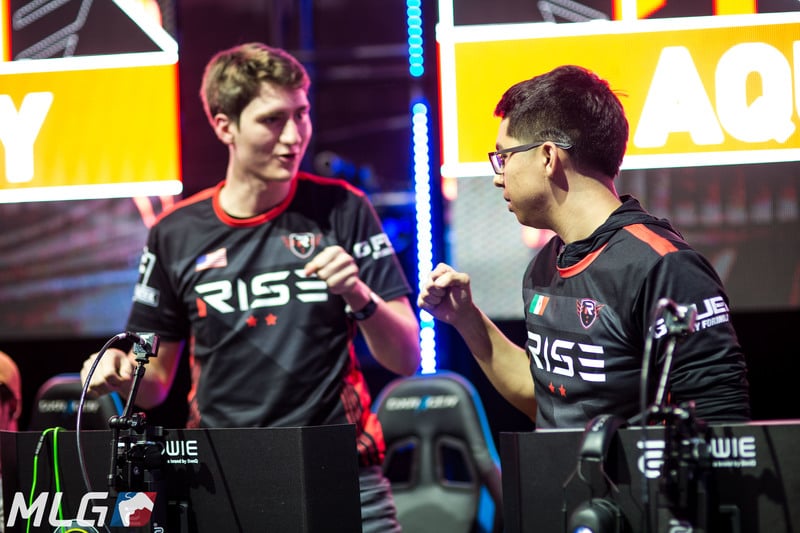 At this point, it’s pretty obvious that Brice Faccento and Ulysses “Aqua” Silva love playing at the Call of Duty World League Championship. The duo broke onto the Call of Duty scene as a part of Team Revenge, who came in second place at CoD Champs 2015.

Last year, Tyler “FeLo” Johnson joined these two on Elevate, and the team earned a third-place finish at CoD Champs 2016.

Now the CoD Champs magic continues for this trio alongside Daniel “Loony” Loza on Rise Nation, as they have eliminated FaZe Clan from this year’s $1.5 million tournament.

This series was a perfect example of the age-old Call of Duty adage, “Search and Destroy wins championships.” FaZe took the Hardpoints, but Rise won both Search and Destroy maps en route to a 3-2 series win Saturday night.

Despite falling to the losers bracket after getting crushed by OpTic Gaming, Ian “Enable” Wyatt, Dillon “Attach” Price, Tommy “ZooMaa” Paparratto, and Peirce “Gunless” Hillman got off to a hot start in this series with a 250-114 win on Retaliation Hardpoint.

Rise responded with a 6-1 victory on Crusher Search and Destroy, and followed that up with a nail-biting 2-1 win on Throwback Uplink.

But FaZe has been a very strong Hardpoint team since acquiring Gunless, and they kept their tournament hopes alive with a 250-102 victory on Scorch Hardpoint.

With this victory, Rise Nation has solidified their spot in the final four at CoD Champs 2017, while FaZe have been eliminated with a top six placing. Rise will square off against Luminosity once again in the losers bracket semifinals on Sunday.

Rise had success against Luminosity in group play, but Luminosity have been on fire in the losers bracket, eliminating both Splyce and eUnited from the tournament earlier today.

And these two teams will kick off Championship Sunday in a winner-take-all match at 10am ET.