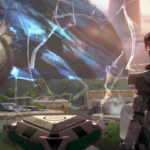 Olympus is “a beautiful, lush city in the clouds,” but that doesn’t mean it isn’t a dangerous place. The city is Apex Legends‘ season seven map and the next arena for the bloodiest sport in the Outlands.

The capital of Psamathe has been a hot topic in Apex since the end of the season five quest, The Broken Ghost. Ash’s ominous greeting—“the path ends here. Welcome…. to Olympus”—left fans wondering about the city’s significance in the greater scheme of things and Respawn certainly has big plans for the area.

Olympus is more than just an arena for the Apex Games. It holds special, bittersweet significance for some legends. It’s the hometown of Lifeline and Octane, the place where Revenant murdered Loba’s parents, and more recently, Horizon’s hometown—at least before she spent the equivalent of 87 years in space and returned to a razed city.

Here’s everything we know about Olympus.

Olympus citizens are above everyone else—literally. The official season seven page describes the city of Olympus as “a beautiful, lush city in the clouds” above Psamathe and that designation is in line with what we’ve seen of it so far. Some of Apex‘s lore moments, such as the season four launch trailer, take place in Olympus, a city that seems unmarred by all the crime and chaos from the rest of the Outlands.

Like Gaea, Olympus is less hostile than some of its neighboring regions. “Thieves. Con men. Murderers. If you’re not on Gaea or Psamathe Gaea, you’re surrounded by this scum every day,” Cheryl Amacci, head of Hammond Robotics’ legal department, wrote in a season four teaser.

The Syndicate’s influence on Psamathe and Gaea is much more diluted than in other areas of the Frontier, such as Solace and Talos—which house two of Apex‘s arenas. Citizens rely on a police force called the Gaea Global Task Force (as seen in a piece of Caustic lore) and can live in relative peace.

Olympus has a few distinguishing characteristics. High-rise buildings loom over cherry blossom trees and big, red balloons are present in several key moments that take place in the city. The balloons are the same as the “UFO” that’s circling Kings Canyon and World’s Edge, a nod to the upcoming arena.

Some loading screens from previous seasons show that the buildings in Olympus also appear to cater to its wealthy denizens, with extravagant additions such as cherry blossom trees and indoor gardens.

It’s unclear how much of that wealth and harmony will translate to the next map. The arena could take inspiration from the more urban areas of World’s Edge, such as Skyhook, Lava City, and Capitol City (pre-season four), but it may also have some open areas for gameplay. The end of Horizon’s animated short shows that there was a mysterious incident in the city—and depending on its magnitude, it could have razed parts of the city to the ground and left it a nearly post-apocalyptic wasteland.

Olympus has important implications outside of gameplay, too. The general narrative of Apex lore points toward the planet of Psamathe and its capital, with the ending of the season five quest teasing that the Apex Games would change locations. Olympus holds special significance for a handful of characters and storylines, namely Horizon, Loba, Revenant, Octane, and Lifeline.

Here’s what the city means to each one of them.

A few legends call Olympus home, but that description changed meanings for Horizon. Dr. Mary Somers was stranded in space for five months—equivalent to 87 years in the capital city—and returned to an entirely different scenario.

Before departing on her journey, Dr. Somers was a prestigious scientist who vowed to find a solution to the energy crisis, going into deep space exploration to find a rare mineral called Branthium. Horizon left her son behind to go on an expedition but was stranded after her assistant sold her out. She returned 87 years later and found a different, nearly post-apocalyptic scenario where her son’s bedroom used to be.

Season seven will likely explain what happened to Olympus in Horizon’s absence. It may also shed some light on what will happen in a different storyline that’s been going on since season five.

The storyline between Loba and Revenant played an integral part in the battle royale’s lore during seasons four and five. Revenant’s debut led to the reintroduction of core concepts from Titanfall—simulacra and Hammond Robotics—that play a vital role in Apex lore. Loba’s storyline the following season dove deeper into those concepts with her relentless hunt against Revenant. And Olympus could be precisely where she needs to be to get her revenge.

Revenant and Loba’s paths crossed in the season four trailer. Revenant’s target was Marcos Andrade, Loba’s father. The simulacrum murdered both of Loba’s parents but left her alive. She lived a somewhat normal life in the foster system but turned into a high-society thief with an expensive taste and the perfect means to fulfill it—until Loba’s revenge consumed her.

In the season five launch trailer, Loba breaks into an underground Hammond Robotics facility below Skull Town. The warehouse contains thousands of Revenant shells, one of the secrets to his immortality. His conscience can be uploaded to a different body each time he dies, which makes him nearly unkillable. The only way to take him out for good is to destroy his “source code,” located in the facility.

In the cinematic, Loba shoots at the glass surrounding the source code—Revenant’s head— and triggers a teleport to a different location: a facility in Psamathe. Her efforts to uncover the exact location of the source code are a key part of the season five quest, The Broken Ghost, when she conned the legends into assembling an artifact that later turned out to be Ash.

Hammond promised Loba it would deliver the coordinates and the thief was preparing to leave for Psamathe when Revenant ambushed her. The simulacrum didn’t want to stop her, though. On the contrary, he wanted to help Loba put him out of his misery once and for all. His programming stops him from harming his source code, so he needs help to destroy it.

Olympus is the capital of Psamathe and the next steps in Revenant’s storyline could point to a hidden spot in the capital, not unlike the underground facilities below Kings Canyon.

The two Olympus natives have skeletons buried in their closets in Olympus. Octane and Lifeline were born and raised in the capital, which sets the scene for their troubled parental relationships. Octane’s father was notoriously absent throughout his childhood, while Lifeline’s parents are known war criminals from the Frontier War. To say that they’re alienated from their parents might be an understatement.

In addition to their backstories, the ending of the season five quest points out another possible narrative hook for the two legends. Octane is terrified by the prospect of returning to Olympus, largely because of Ash. The simulacrum’s monologue throughout the final chapter contains a series of cryptic hints that have a specific meaning—like a word-by-word reproduction of a Horizon quote— and mention two names: Darion and Duardo.

Although the Apex lore hasn’t explained the meaning behind the names yet, Octane seems deathly afraid of Ash. “u heard what the head said. ‘Darion.’ ‘Duardo.’ It knows! how did it know their names?” He asks Lifeline.

Olympus could reveal secrets from Octane and Lifeline’s past—including the identity of Darion and Duardo—and give a deeper dive into their backgrounds and stories.

Apex’s seventh season is set to begin on Nov. 4.