You’re not seeing things, Apex Legends fans. An unidentified flying object really is circling the arenas in Apex as part of a season seven teaser—and it points to the planet of Psamathe.

Players who drop into the Apex Games can notice a gigantic flying structure hovering in the outskirts of both Kings Canyon and World’s Edge. It’s hard to miss its trademark red balloons and colossal size, and legends can spot it even from the dropship.

Although this is the structure’s first in-game appearance, fans spotted it in a devstream months ago and started calling it a “UFO.” It’s also appeared in several other pieces of media, including the season four launch trailer and art for Loba’s episode of “Stories from the Outlands.” 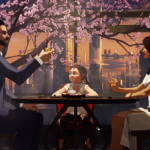 The UFO is a clear nod to the planet of Psamathe—more specifically, to its capital, Olympus. The structure’s previous appearances involve the city somehow: the season four launch trailer and Legacy of a Thief short both take place in Olympus.

The season five quest, The Broken Ghost, ended with a big hint toward the future. Ash, the Titanfall simulacrum, finished her monologue with an ominous greeting: “Welcome… to Olympus.” The epilogue shows Octane talking to Lifeline, rattled by Ash’s creepy message and by the prospect of returning to their home city.

Ash’s mention of Darion and Duardo—two still unknown people in Apex lore—shakes Octane. “Just hearing their names makes me want to run. More than I usually want to run,” he tells Lifeline. If the next season moves to Olympus, the duo could play a bigger part in the coming story.

Psamathe also holds special significance for the storyline between Revenant and Loba. After the thief broke into the Hammond Robotics facility in the season five launch trailer, Revenant’s “source code” (his head) was moved to an undisclosed facility on Psamathe. Loba’s goal was to go to the planet and destroy Revenant once and for all—and the simulacrum offered to help her.

Fans speculated that season six would bring in a new map and advance the storyline between the simulacrum and the thief, but the story arc was put on hold after Respawn introduced a new competitor, Rampart. The next season could resume that previous story, however, and dive deep into the new setting.

Players can see the UFO near Airbase on Kings Canyon and close to Skyhook on World’s Edge, but it could move to specific places in each arena. “I assume it’ll move between days, like the Leviathans,” community figure Frozenfroh theorized.

The devstream screengrab shows the object close to The Broken Coast on Kings Canyon, just south of its current location. If Frozenfroh’s theory is correct, the object could continue to fly until it reaches its destination, similar to the Planet Harvester in the build-up to Apex‘s fourth season.

What’s inside the UFO?

Shrugtal, one of Apex‘s most prolific data miners, recreated the structure ahead of the season six launch, complete with all the details inside. The UFO contains a “park-like area,” with grass, benches, trash cans, and cherry blossom trees—an important hint to the UFO’s likely origin.

Most media depicting Olympus, including launch trailers and loading screens, shows plenty of cherry blossom trees in the city—the same trees that are scattered around the park, according to Shrugtal. 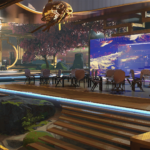 One name in particular appears frequently in the UFO: Reseda. It’s scrawled on signs and landmarks throughout the area, including a “Reseda Trail.” In English, the word describes a specific genus of plant, but it could take on a new meaning in the Apex universe, such as a corporation or character.

The UFO may have also appeared as part of Rampart’s official character art. A blueprint hiding in Rampart’s temporary workshop shows an object that looks like a top view of the UFO. But even if that theory is correct, the connection between the modder and the UFO is still unclear.

Shrugtal’s exploratory video is based on data-mined findings and reflects an unofficial version of the models used. Even if the video depicts an outdated build, it’s enough to give fans an idea of what it could look like and the design directions involved. But with Apex‘s seventh season scheduled for release on Nov. 4, players shouldn’t have to wait too long to see what’s inside.