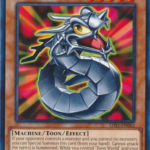 There are a number of ways to incorporate them into your decks just like their classic versions, depending on which effects or tribe you might look to add. While they haven’t seen the competitive scene in a while, the recent additions could make them worthwhile once again.

Here are the best five Toon cards in Yu-Gi-Oh!.

Toon Harpie Lady is a lackluster beast with only 1,300 ATK and 1,400 DEF, and it can’t even attack during the turn it is summoned. But if you control Toon World, you can special summon it from your hand and destroy a spell or Trap your opponent controls if you control another Toon monster. This effect can be used once per turn, allowing you to negate your opponent’s answers to your board.

What looks like a mediocre card, can quickly turn unbeatable with the right combination of cards. Toon Cannon Soldier is rocking only 1,400 ATK and 1,300 DEF, however you can use its effect to Tribute a monster to inflict 500 damage to your opponent however many times you wish per turn. If you combine it with the correct cards to revive units, you can potentially OTK your opponent once you have the cards in your hand.

The Toon Dark Magician is similar to its existing card counterpart, except it rocks an additional effect. Once per turn, you can discard a card to either special summon a different Toon from your deck or add any Toon Spell or Trap to your hand, making it a great cycling card if you don’t have a good answer in your hand.

The Toon Black Luster Soldier needs to be special summoned by Tributing Toon monsters whose level equals eight or more from the hand or field. Once you get this card on the board, you’ll get a powerful monster with 3,000 ATK and 2,500 DEF, who is capable of running away with the match.

Like other Toon monsters, Toon Cyber Dragon can’t attack the turn he’s summoned. You can overcome this if your opponent doesn’t control any Toon monsters and you have Toon World on the board. With decent stats of 2,100 ATK and 1,600 DEF, it is a great addition to plenty of decks.