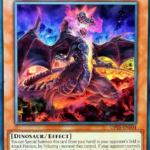 Kaiju cards in Yu-Gi-Oh! are associated with Godzilla-like cards, which have various powerful effects to compensate for their demanding summoning processes.

These cards were done justice by their developer, though. They have fearsome effects, allowing you to incorporate them into various decks to get a taste of their power.

Here are the best five Kaiju cards in Yu-Gi-Oh!.

The Interrupted Kaiju Slumber is one of the most powerful spells related to the tribe. You wipe the board, then Special Summon two Kaiju monsters from your deck, which must attack during that turn. On top of having such a powerful effect, it has an additional beneficial effect after you send it to the graveyard. You can banish it to add one Kaiju monster from your deck to your hand.

Jizukiru is a powerful creature, bearing 3,300 ATK and 2,600 DEF at the cost of having high summoning requirements. It has an amazing effect, which allows you to remove three Kaiju counters from anywhere on the field to negate the card effect during either player’s turn. It’s a great addition to any Kaiju deck, allowing you to overwhelm your opponent and negate their counters at controlling the board.

Thunder King has one of the highest ATK of 3,300, allowing you to overwhelm most creatures on board with ease. With effects similar to Jizukiru, the Thunder King is one of the best additions to any Kaiju deck if you want to have an unstoppable late game. When on the board, this creature will take over the game and allow you to win the match outright or next round.

Gamecial is one of the better defensive Kaiju monsters, bearing 3,000 Def and allowing you to remove only two Kaiju counters from anywhere on the field to negate the activation of a card or effect your opponent is trying to use. If you do, that card is banished and it won’t see play again during the match.

Dogoran is a powerful offensive beast with 3,000 ATK and only 1,200 DEF. You can give your opponent a weak Kaiju monster, before being able to Special Summon it to your battlefield. On top of it having strong offensive capabilities, you can remove Kaiju counters once per turn to destroy all monsters your opponent controls.