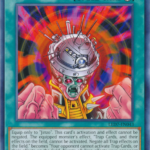 Jinzo is a powerful creature in Yu-Gi-Oh!, requiring a tribute to Summon. He has 2,400 ATK and 1,500 DEF, which seems lackluster, but he possesses an effect that disables all Trap cards on the battlefield. This ability makes him one of the best creatures to counter a trap-heavy board.

Over the years, players have been experimenting with various cards to build an archetype around Jinzo, and while there’s plenty of cards you could put into your deck, we selected the ones that have the best synergy with him.

Here are the five best Jinzo cards in Yu-Gi-Oh!.

Amplifier is a powerful support card for Jinzo. It allows you to activate your Traps while denying your opponent from doing so. But this comes with a price, and if Amplifier is removed, then Jinzo will be destroyed. It’s a double-edged sword, which pays off if you know you’re going to benefit from your traps in the upcoming turns.

Jinzo – Jector is a four-level Dark creature with 800 ATK and 2,000 DEF. Its name becomes Jinzo while on the field or in the graveyard, allowing you to use various effects to bring him back or buff him up. It bears a powerful effect for the cost of sacrificing it. You can add a Jinzo monster from your deck to your hand, then reveal all Set Spell cards your opponent controls. If there are traps in their control, you can Special Summon an amount of Jinzo monsters up to the number of Traps revealed, making this a formidable card against a wide board.

Jinzo – Returner is a pretty weak monster with only 600 ATK and 1,400 DEF. But Jinzo – Returner can attack your opponent directly, making this card a formidable finisher when you’re close to killing your opponent. When he dies or gets sent to the graveyard via different effects, you can Special Summon a Jinzo monster with a small downside. The summoned Jinzo dies at the end of the turn. The best use of this card is to sacrifice the resurrected monster to Summon something from your hand requiring a tribute.

Psychic Shockwave is a conditional card, requiring your opponent to activate a Trap card for you to benefit from it. Once your opponent does, you can discard a Spell or Trap to Special Summon a level six Dark monster from your deck, with Jinzo being the best candidate for this. You’ll avoid having to tribute a creature by using this spell.

Jinzo – Lord is an upgraded version of Jinzo with more attack and an additional damaging effect depending on how many face-up Trap cards are there on the field. This card acts as a great finisher if your opponent has a strong board you can’t get through. The only downside is that you need to Jinzo face-up on the battlefield to summon Jinzo – Lord.