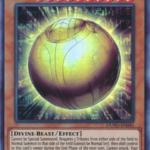 God cards in Yu-Gi-Oh! usually have various powerful effects to compensate for their summoning conditions.

Regardless of meta, players are always finding ways to include them in their decks for their terrific art and effects to take over games.

Here are the best five God cards in Yu-Gi-Oh!.

The Wicked Avatar can be summoned by Tributing three monsters. After you summon it, your opponent cannot activate Spell or Trap cards until the end of their second turn after the card is summoned, giving you plenty of time to take over the game. The ATK and DEF of the card are each 100 points higher than the highest face-up monster’s ATK on the field, so you shouldn’t use it until the late game.

Obelisk the Tormentor is a powerful God, requiring three Tributes to Normal Summon as well. His summoning cannot be negated by any card and no cards can be activated when he is being summoned. It cannot be buffed up or destroyed by either player with card effects. Once per turn, during the End Phase you can Tribute two monsters to destroy all opponents your opponent controls, but you will not be able to attack with him.

The Winged Dragon of Ra is similar to other gods, requiring three Tributes to summon. His summoning cannot be countered, ensuring you’ll be able to get him on board. He has flexible ATK and DEFs depending on how much LP you are able to pay. You can reduce your points down to 100 to ensure you get the maximum amount of stats on board, as long as you’re sure your opponent doesn’t have a way to deliver the killing blow.

Uria, Lord of Searing Flames is summoned by sending three Traps to the graveyard. For each Trap in your graveyard, the card gains 1,000 ATK, allowing you to have a devastating creature on board, ready to kill your opponent with one blow. Once per turn you can destroy a Spell or Trap your opponent controls, making it tough for your opponent to get rid off Uria.

The Sphere Mode of the Winged Dragon of Ra allows you to get rid of three creatures from your opponent’s side of the field to summon it. It’s an amazing creature combined with a removal effect two-in-one. It can fit into various decks with ease.