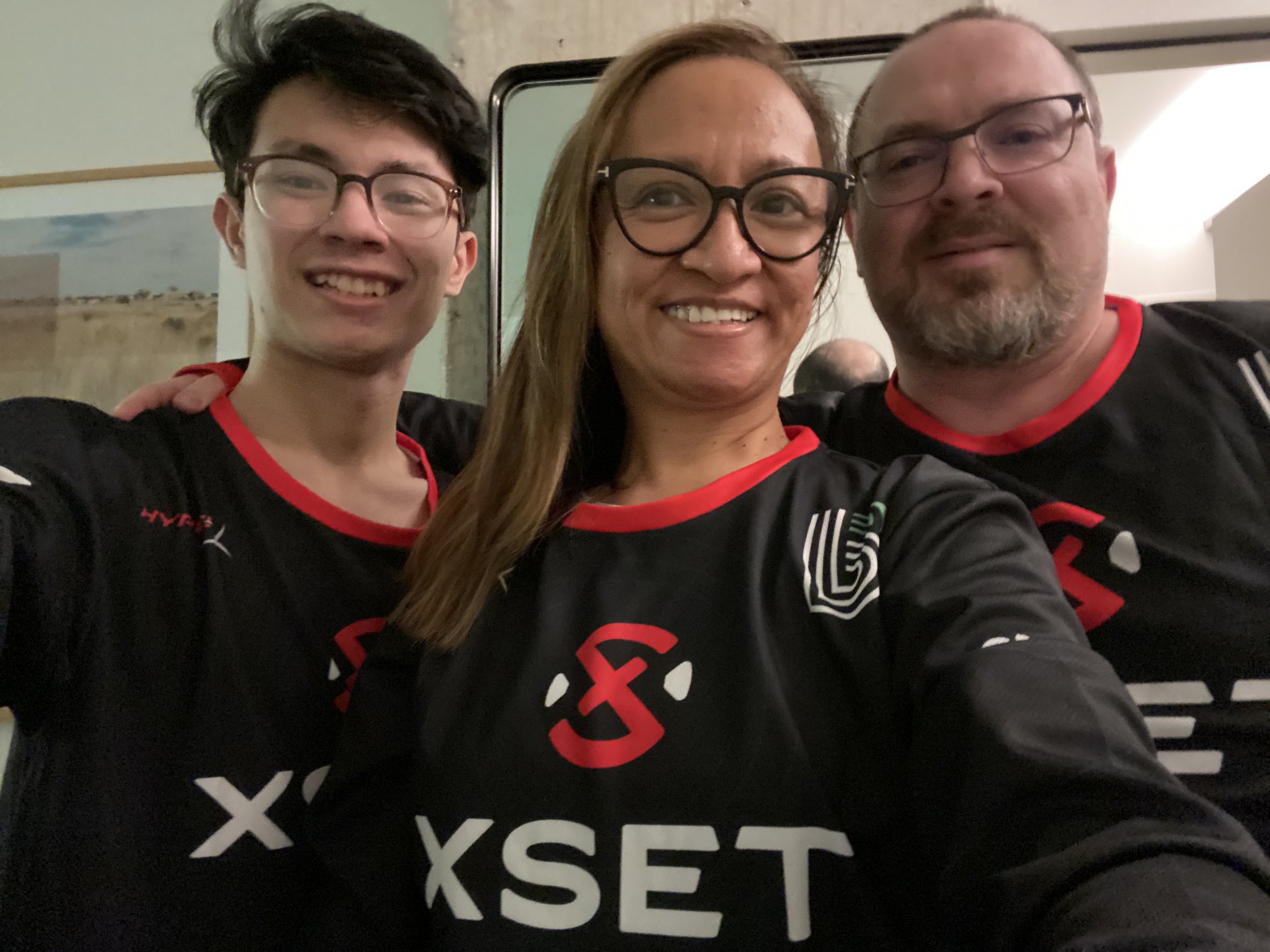 A young Zachary “zekken” Patrone could often be found with a Wii remote tightly gripped in his hand, assuming the position as if the controller were a bowling ball. He was trying to beat his father in a game of Wii Sports bowling, and the majority of the time, he lost. Sometimes he would get frustrated or cry, but his parents were always there to make sure he was OK.

As he grew older, his parents, Paul and Zaida Patrone, became more than just “Player Two” in a Wii Sports bowling match. What they didn’t know in those days of virtual bowling and mock tennis was that they were building zekken’s competitive drive and what would be the skills he needed for an entrance into professional esports.

Whereas many parents of aspiring esports athletes or casual gamers may push their children toward more traditional career paths, zekken’s parents went from happy participants in family activities to honorary members of an esports team. Throughout it all, though, Paul and Zaida have been zekken’s two biggest supporters. The 17-year-old VALORANT prodigy found success in competitive gaming early on in his career and his parents follow him to every event he goes to.

An esports star in the making, even at a young age

When the Wii was popular, the family played Wii Sports almost as competitively as zekken plays VALORANT now.

“When [zekken] was very young, he played against me on the Wii, and I was crushing him, and I wouldn’t let him win because in life, nobody lets you win,” Paul said. “So he would get upset, and I’d be like ‘in a couple of years you’ll be beating me,’ and he was.”

Many parents will allow their children to play video games, but a smaller percentage actually play games with them. Zekken grew up in a household where it was a bonding activity for him and his father. As long as his grades were good and his responsibilities were taken care of, his mom didn’t object to the amount of time he spent on games, and his father enjoyed playing games with him.

At the age of 13, zekken attended a Super Smash Bros tournament at a college near his house and got “rolled.” During that same tournament, there was an Overwatch competition happening on a stage. Zekken started watching and after his first experience seeing an esports tournament live, he wanted to learn more about the scene.

After his first foray into esports with Super Smash Bros, zekken started playing CS:GO but not at a professional level. He picked up VALORANT on the first day of its release, realizing early on that it could be a game to go pro in. He started playing with friends and eventually made his way onto organized teams.

Zekken served on some early VALORANT teams like the Wichita Wolves, Phoenix1, and Noble before he caught XSET’s attention. XSET, since the beginning of the VCT, has been regarded as a tier-one team, so this was a big move for the young VALORANT player and marked the first big contract of his esports career.

“My first reaction was, that’s a scam,” Zaida said. “How will somebody pay you? As a parent, you know? And I’m old. I don’t play video games. … I said ‘did you check the Better Business Bureau? Fake news. That was my first reaction. [He was] still a minor, of course any parent would protect their child.”

Paul reacted quite the opposite. He and zekken had spent time watching esports on ESPN together, and the two of them knew the impact of what this contract meant for his son’s potential career in VALORANT.

“I was like ‘let me see the contract’,” Paul said.

Zekken says he presented the contract to his parents, and although his mom might have been a little apprehensive about the whole thing, XSET staff addressed all of her concerns.

“They were really excited about the prospect of joining XSET,” zekken said. “Especially after talking with [COO Marco Mereu] and [VALORANT head coach Don “syykoNT” Muir] about it. Both of them really helped get my parents on board with the whole esports thing.”

Right around this time last year, on June 26, 2021, zekken joined XSET officially, and his parents have followed him to every tournament since then. They said if he goes to a different country for a Masters event, they’ll follow him there too.

The negative stigma of video games is fading

Many parents, when presented with the opportunity to allow their teenager to become part of a professional esports team, balk at the idea. Parents used to struggle with the idea of their kids spending so much time on a game, let alone playing video games as a career, especially when they are still in school. But times are changing.

Six in 10 parents say video games have no negative impact on their children, according to a study done by Pew Research Center in 2008. Although the negative stigma of video games is turning into a positive one, parents still often don’t applaud the idea of their kid playing them as a career choice.

But zekken grew up playing video games with his dad. Even to this day, Paul plays VALORANT and he’ll gladly talk shop about the game and how he mains Omen with fans of it at tournaments and events.

Zekken and his father used to watch ESPN 2, which sometimes premiered esports matches. Paul encouraged zekken to look into esports, even though his wife had no inkling about it as a concept, or that Paul and her son often watched esports matches together.

“I would see ESPN 2 play esports like Super Smash Bros, which he liked to play and was very good at, so I put it on his TV, and I’d be like ‘look people get paid to play that game, look at that,'” Paul said. “I tried to encourage him, and [Zaida] had no idea about people getting paid to play video games.”

Although she didn’t know much about esports, she did know that when they traveled for spring break or for vacation, her son was constantly playing on his DS or games on his phone like Clash of Clans.

Zekken’s professional career and his future in esports

Before his professional esports career took off, zekken’s parents envisioned him being a highly educated professional, like a doctor or lawyer. When he was younger and adults would ask him what he wanted to be, zekken would say he wanted to be a professional sports player. He played sports growing up and was always competitive in nature, according to his parents, so a career in esports aligned with his desire to compete.

“We only live once, we have to let him live his life,” Zaida said. “I want him to be happy, successful, safe, and healthy.”

His parents expect him to balance his high school grades while in conjunction with being on a professional VALORANT team, which no doubt takes up a lot of his time. Most of his professional career started after the COVID-19 pandemic, so he wasn’t physically in school for a lot of his time with XSET. He juggles school, extracurricular activities, and practice with XSET, and still manages to have an hour or two of free time during the day.

Zaida sees her son as a scholar and zekken has proven her right. He’s on the honor roll at his high school and maintains good grades despite having the responsibilities and restrictions that come with being on a professional VALORANT team like XSET. Zekken said his parents help him with the confidence to be able to do both.

“I feel that my parents support me a lot in my esports career and having that kind of backing really helps me to have confidence in my choice to pursue this kind of career,” zekken said.

Although zekken is happy on the path that he’s currently taking, he always has college as a backup. With great grades and a strong work ethic, he’ll likely get into a good college if he continues his education in the future. For now, he and the rest of the XSET VALORANT squad are looking ahead to the next Masters event, which they’re trying to qualify for.

XSET are primed for a spot at Masters since they have been doing incredibly well in the VCT Challengers Stage Two tournament. They went 4-1 in the group stage and started the playoff bracket in the semifinals. After winning their rematch against 100 Thieves, they now have just one more game ahead of them to make it to their first international tournament.

They only need to win against OpTic Gaming to make it into the grand final. If they lose, they’ll have to get through either FaZe Clan or NRG before punching their tickets to Masters.

The second Masters event of 2022 is set to be played in Copenhagen, so if XSET make it through to Masters, the Patrones will be booking their flights to Denmark for zekken’s first international appearance in professional VALORANT.