We’ve known about the set for several months now, but the official announcement came with the first look at the Pokémon V we’ll be getting for each of the Eeveelutions.

The set will be released in Japan on May 28, adding 69 cards into the OCG’s card pool, including several Battle Styles Pokémon and more. The main focus will obviously be on Eevee and its evolutions, which will be featured as Pokémon V. 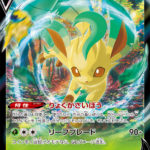 All eight Eeveelutions have now been shown as part of the official release, though it’s only their normal art. Vaporeon V, Jolteon V, Flareon V, Espeon V, Umbreon V, Glaceon V, Leafeon V, and Sylveon V will all have both regular and full-art cards to collect.

Of those, only Vaporeon, Jolteon, Flareon, and Espeon will be getting VMAX cards, which were shown off in the VMAX Special set. 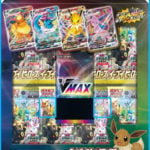 The Eevee included in this set also has a powerful ability, allowing players to search for up to three Pokémon V, reveal them, and add them to their hand before shuffling their deck. This will provide a great engine for any Eeveelution-based strategy, as well as for most Pokémon V-centric decks that need a good searcher.

Some of the Eeveelutions are also going to feature Battle Styles classifications. Umbreon V and Flareon V will be Single Strike, while Vaporeon V and Sylveon V are Rapid Strike. The remaining four are just normal cards. 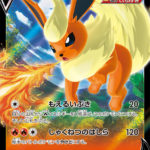 Additionally, fans got a first look at several other Pokémon that will be included in the set, such as Single Strike variants of Entei, Electrode, and Grimmsnarl. Florges and Marshadow are going to be available as Rapid Strike Pokémon, too.

We won’t know how the cards from Eevee Heroes will make their way into the TCG until later this year, but the set is dropping on May 28 for Japanese players.