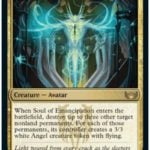 There are a total of 10 Magic: The Gathering henchmen within the Streets of New Capenna Standard-legal set, supporting the five three-color Limited archetypes.

The Streets of New Capenna (SNC) set showcases three-color faction archetypes within the Limited format. Each faction represents the five crime families and their legendary creature bosses. Within the SNC Limited format, there are a total of 10 archetypes in which there are five Rare and five Uncommon rarity henchmen. The henchmen with a Rare rarity directly support the five New Capenna mechanics associated with each faction while the Uncommon henchmen provide support toward those mechanics and themes found in each three-color faction.

The Brokers family is in Bant (Green, White, and Blue) colors with the SNC mechanic Shield Counters. These counters provide protection against any form of damage, including wraths that don’t exile.

Soul of Emancipation can get used on an opponent but provides a greater value when used on weaker or token creatures that you control, turning them into 3/3 angel creature tokens that have Flying. It’s a solid finisher in a Brokers SNC Limited build.

Disciplined Duelist takes advantage of the Shield Counter mechanic in conjunction with Double Strike on a 2/1 body. The human citizen can provide early aggressive attacks while still having value during the late game.

The Obscura family has Esper (White, Blue, and Black) colors, using the Connive mechanic. This SNC mechanic loots and provides +1/+1 counters on creatures that have Connive. Instead of discarding lands, the Connive mechanic encourages players to discard non-land permanents instead. If a Connive spell is countered, the controller still gets to loot.

Containing the MTG keywords Flash and Lifelink, Obscura Interceptor reanimates a target spell to hand via Connive. The cephalid wizard is great on defense while also applying offensive pressure within the SNC Limited Obscura archetype.

Nimble Larcenist is a solid three-drop 2/1 with Flying. There isn’t an abundance of creatures with Reach in the SNC Limited format, allowing the bird rogue to chip away at an opponent’s health.

Maestros Diabolist can deal with creatures that have a Shield Counter via the 1/1 token it produces. The three-drop vampire warrior also has the MTG keywords Deathtouch and Haste, providing offensive pressure on an opponent while being able to defend as well.

Corpse Appraiser doesn’t have the Casualty mechanic but can find cards in your library that do. The three-drop vampire rogue has solid 3/3 baseline stats and can provide card advantage via the three cards added to your hand, all while exiling a card from any graveyard.

The Riveteers are in Jund (Black, Red, and Green) colors using the Blitz mechanic. This Limited SNC archetype supports creature-heavy builds that like to hit an opponent hard and fast as an Aggro-based archetype.

Riveteers builds want to hit an opponent hard with creature damage, and Ziatora’s Envoy does that via Trample. The viashino warrior also has an alternate Blitz cost to provide Haste and its ability provides card advantage in conjunction with card draw from Blitz.

Supporting aggressive strategies, Crew Captain gains Indestructible upon entering the battlefield. The human warrior also has Haste with 4/2 baseline stats, applying a significant amount of pressure on an opponent when played on turn three.

The Cabaretti family has Naya (Red, Green, and White) colors and showcases the Alliance mechanic. Alliance is similar to other enter-the-battlefield MTG mechanics like Landfall, triggering an effect when a creature enters the battlefield (this includes tokens).

The Alliance mechanic wants creatures entering the battlefield each turn, if not multiple times a turn. Fleetfoot Dancer makes quite a showstopping entrance with the MTG keywords Trample, Lifelink, and Haste. The elf druid can get played on turn four but will likely have a greater impact during the late-game stages of a match within SNC Limited Draft.

Brazen Upstart is a three-drop 4/2 that has a death trigger to work in conjunction with the ETB triggers via Alliance within the Cabaretti SNC Limited archetype. The elf shaman provides its controller with a creature from the top five cards of their library upon dying and has the MTG keyword Vigilance.