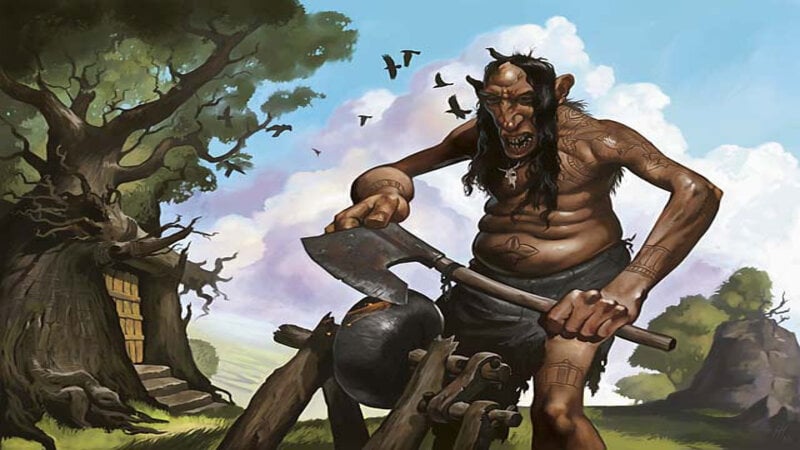 White has suffered from a lack of decent Throne of Eldraine cards during Magic: The Gathering’s spoiler season and that trend continues today with Realm-Cloaked Giant.

The Throne of Eldraine (ELD) set favors mono-colored deck builds. Most of the colors in the pie (especially Green and Red) have received top-notch foundational cards, and yet the spoilers being revealed in White are simply average.

Realm-Cloaked Giant is a storybook card with a creature on one side and an Adventure spell on the other. Most of the Showcase cards in ELD are designed to give a player a choice. Realm-Cloaked Giant, however, benefits from having the Adventure (Cast Off) played first.

A board wipe on turn five is solid within Standard Constructed, but not if it doesn’t wipe the battlefield of potential threats. Cast Off (the Adventure side) wipes the board of all non-Giant creatures as a five-drop. Realm-Cloaked Giant then enters the battlefield on turn seven (cast from exile).

Meanwhile, several powerful giants from other archetypes survive such a wipe.

Realm-Cloaked Giant also lacks Reach, an evergreen ability typically given to giants. And with an increased number of flyers in ELD and from M20, not having Reach could cost you the game—despite having a 7/7 Giant on the battlefield.

It has potential as a finisher within Limited, but Realm-Cloaked Giant is simply too narrow (and not powerful enough) to include in a Standard Constructed deck at this time.

Related: Here’s every Throne of Eldraine spoiler from Sept. 16

The Throne of Eldraine set launches via MTG Arena on Sept. 26. The official ELD release date is Oct. 4.