Ten archetypes means there are 10 powerful paths to victory in Theros: Beyond Death. 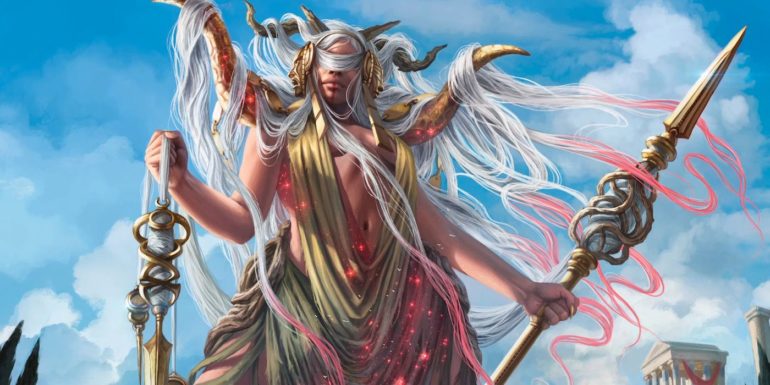 Magic: The Gathering‘s newest set, Theros: Beyond Death (THB), is about to hit Magic Arena. That means it’s a great time to review the set’s Limited archetypes and their top uncommon enablers.

Here’s everything you need to know to come out on top in THB Draft and Sealed.

A quick note about mono-colored decks

Mono-colored decks in THB will definitely be a thing with the Devotion mechanic in pay. In Limited, however, there are two considerations you should make.

First, Sealed can’t support mono-colored decks. With only 90 cards, the odds of getting 23 or so playables all in one color are very low. Unless you really know what you’re doing, aim for a dual-color deck.

Second, aim for a mono-colored deck in black, white, or green. Red and blue only have one and two common or uncommon cards associated with them, respectively.

For White, go wide with Reverent Hoplite. Black’s big draw is a game-ending drain with Gray Merchant of Asphodel. Green, on the other hand, gets a faux-Overwhelm with Klothys’s Design.

For those who remember Mono-Blue Tempo from last year, this deck plays out very similarly. You’ll want to cast out some cheap attackers like Hero of the Pride, then disrupt your opponent’s gameplan by bouncing or tapping down their creatures. Finally, generate card advantage with cards like Staggering Insight and you’ll have a clear path to victory.

Dimir decks this go around are all about putting cards from the library directly into the graveyard. Devourer of Memory and the Escape mechanic (on creatures like Underworld Charger) are the main reasons why. Mill yourself with enablers like Venomous Hierophant, then pull off graveyard shenanigans like Pharika’s Spawn, a recursive threat that eats an opponent’s creature every time you bring it back.

The mantra of Rakdos is simple: get the most out of your creatures, even if that means killing them yourself. THB is packed with valuable reasons why, starting with sacrifice fodder like Discordant Piper and Careless Celebrant. Slaughter-Priest of Mogis turns those creatures into a major beating, while Soulreaper of Mogis turns them into card advantage.

Then, set up combos by sacrificing creatures that immediately come back to life thanks to Minion’s Return—or even sacrifice your opponent’s creatures with Portent of Betrayal.

Gruul decks get powered up by having creatures with power four or greater, an indirect callback to Khans of Tarkir’s Ferocious mechanic. Warden of the Chained, for example, is a cheap beater that unlocks the ability to attack with a four-power buddy. You’ll find plenty in the set, like Nylea’s Huntmaster. Get additional benefits with creatures like Nessian Hornbeetle and Stampede Rider.

Auras are a subset of the enchantment type that attach to other permanents and usually go to the graveyard whenever that permanent leaves the battlefield, making them easy targets for your opponent’s removal. Siona serves two important roles in an Aura-focused deck.

First, she finds Auras and then she helps mitigate the risk of using them by creating a 1/1 creature whenever you cast an Aura onto a creature. Since Theros is an enchantment-themed plane, there are plenty of useful Auras. Warbriar Blessing will often be a flexible removal spell, while Commanding Presence tacks on even more value with additional 1/1 creatures.

Reanimator decks almost always have one key play others don’t: bringing creatures back to life from the graveyard. This deck is no different and Rise to Glory is a powerful reanimation spell with a nice twist, bringing back an Aura as well.

Where we’d want to be with this deck is targeting creatures like Blight-breath Catoblepas and Auras like Mire’s Grasp. Both function as removal, turning Rise into a spell that kills two of your opponent’s things and leaves behind a decent body.

Don’t attempt this strategy along with the WB rare creature, Kunoros, Hound of Athreos, though, since it prevents all reanimator effects.

Draw Go is a classic Magic archetype where the player, for their turn, draws a card and says “Go,” passing over to their opponent’s turn. The goal is to cast all your spells on their turn, whether they’re counterspells, other instants, or permanents with Flash.

Mischievous Chimera, the signpost uncommon, is a flying beater with extra value for every spell you cast on your opponent’s turn. You can steal some blue spells from that UW Tempo deck or red damage spells like Fateful End or Omen of the Forge.

Theros: Beyond Death’s only new mechanic is Escape, which lets you recast spells from your graveyard. This includes creatures like Voracious Typhon, enchantments like Mogis’ Favor, and even instants like Cling to Dust. Acolyte of Affliction, this archetype’s signpost uncommon, fuels the deck by filling the grave, coupled with a useful Gravedigger-like add on.

WR decks in THB align with the traditional Go Wide token nature of Boros but throw in a Therosian twist with faux-Heroic. The original Theros block featured the Heroic mechanic, abilities that trigger when you target your own creature with a spell.

This archetype has access to many pump spells and Auras that will target your own creatures. Then, these Hero creatures—Hero of the Games, Hero of the Pride, Hero of the Nyxborn—provide a major boost to your squad, making for a deadly attack.

Constellation is all about putting enchantments on the battlefield. It’s almost always on creatures and comes this time around on cards like Setessan Skirmisher, Nessian Wanderer, and Eutropia, the Twice-Favored.

Look for cheap Auras like Setessan Training (which even draws you a card) and Eidolon of Philosophy to make sure to get easy Constellation triggers. For a stealthy combo, check out Shimmerwing Chimera, which lets you return an Aura to your hand every turn, making sure you always have a Constellation play readily available.