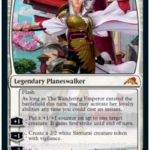 Day one of Kamigawa: Neon Dynasty spoilers is a wrap and there are plenty of new mechanics and cards to get the hype train rolling for the first set of 2022.

Neon Dynasty returns to Kamigawa, the Japanese-inspired plane, for the first time since 2005. The plane is now far into the future and shows an unprecedented futuristic look in Magic.

Other new cards revealed included double-faced sagas and a card that addresses the pesky legend rule in a set that cares about legendary spells.

Here are the most intriguing cards from day one of Neon Dynasty spoiler season.

This four-mana Planeswalker is going to be a force in Standard and could see play in eternal formats. The key to this card is the versatility it provides. It can do just about anything you need it to at a given time thanks to the ability to play it at instant speed.

The Wandering Emperor is removal, life gain, creates a Creature, and dishes out +1/+1 counters. White decks will run this card as a solid all-around powerful card in the four-drop slot. The biggest question is which shell this card is best in.

The Magic vorthos community is in shambles at the revelation of Tamiyo’s compleation in the final chapter of Neon Dynasty‘s short story. The beloved Planeswalker appears in her new form on Tamiyo, Compleated sage.

This Planeswalker debuts a new keyword ability named Compleated. Players can pay either color of the hybrid mana cost or pay two life in its place. If two mana is paid, the Planeswalker enters the battlefield with two fewer loyalty counters.

Note that Tamiyo is the only card in the set with Compleated. It suggests that more Planeswalkers will succumb to the Phyrexians in future sets.

There’s a good chance this delightful doggo will see play in Standard. A two-mana 1/1 that draws a card when it enters the battlefield is pretty good. It is an Enchantment that will be relevant in Standard going forward.

Spirited Companion isn’t an overwhelmingly powerful card but could be a staple two-drop in white weenie lists in Standard and Pauper.

Every tribal deck in Standard is going to run four copies of Secluded Courtyard. This land enters the battlefield untapped and taps for any color of mana as long as it’s used to cast a Creature of the chosen type or activate an ability on that Creature.

Decks that run a large number of Creatures of a single type will want this deck, especially if it flexes into two or more colors. It still taps for a colorless mana so this land isn’t incompatible with running noncreature cards.

Invoke Despair is another tool for already strong Black control builds in Standard. This card is versatile and can generally be played into any board and still be effective. This is either non-targeted removal or forces your opponent to lose two life and you draw a card.

It seems like the most common way this card will resolve is causing your opponent to sacrifice a Creature then you get two instances of drawing a card and forcing the opponent to lose two life. Enchantments and Planeswalkers aren’t as common on most battlefields like Creatures are.

If Invoke Despair hits an opponent’s Enchantment or Planeswalker that’s extra value, but oftentimes hitting a Creature and drawing two cards is more than enough value for a five-mana investment.

Neon Dynasty revealed two pieces of its legendary land cycle today. Each card has Channel that allows the player to discard it for an effect. Sokenzan, Cradle of Uprising appears to be a powerful card that Mono-Red Aggro decks will want.

This card can use Channel to Creature two haste tokens. This could be effective in pushing in the last bit of combat damage that closes out the game. Red in Neon Dynasty has a Spirit theme so the token’s type could be relevant.

Neon Dynasty releases on Magic Arena and Magic Online on Feb. 10 with a full tabletop release on Feb. 18.