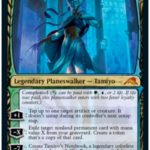 Tamiyo is a Moonfolk Planeswalker that first appeared in Avacyn Restored in 2012. She’s a truth-seeker from Kamigawa who’s appeared throughout the multiverse, conducting research and seeking truth.

Tamiyo, Compleated Sage is her latest Magic: The Gathering card in Kamigawa: Neon Dynasty and represents her new form. Compleation is the state of perfection for Phyrexians, where their complete physical being is replaced by metal.

Featuring a new mechanic and a modernized Phyrexian mana cost ability, Tamiyo is a combination of old and new designs and further portents the looming Phyrexian presence in the multiverse.

The Compleated keyword asks interesting questions of the player while alleviating the historical issue of abilities that cheat mana costs being too good. If two life is paid instead of U or G, Tamiyo enters the battlefield with two fewer loyalty counters.

It seems like the key to Tamiyo’s power comes from the -X ability. This is a solid pseudo-reanimation effect that can recover a key Creature or Artifact, which will be relevant in the upcoming Standard format. Look for Artifacts that sacrifice themselves for value. These are perfect targets for Tamiyo’s -X ability.

The +1 is the bread-and-butter ability that turns Tamiyo into a bomb in Limited and a solid midrange or tempo piece in Constructed formats. This kind of tapping effect is always relevant in midrange matchups.

It won’t be as effective if Mono-White Aggro and Mono-Green Aggro remain at the top of Standard, however.

The ultimate doesn’t immediately win the game, but making every spell cost two less and having a source of repeatable card draw should be enough to close it out quickly.