Over a dozen new Magic: The Gathering cards from the upcoming Kamigawa: Neon Dynasty Standard-legal set were revealed today by Wizards of the Coast at the launch of preview season.

Scheduled to release digitally via Magic Online and MTG Arena on Feb. 10, followed by a global launch on Feb. 18, MTG Kamigawa: Neon Dynasty (NEO) contains over 300 regular cards. Prerelease for the upcoming Magic set will take place on Feb. 11. The timeline of the set is concurrent with present-day events taking place in the Multiverse, around 1,200 years after the events from the original Kamigawa block.

Modernity has blended in with tradition, causing friction with some kami and mortals, along with the disappearance and reappearance of the missing emperor of Kamigawa. The new NEO set features a total of four planeswalkers. Mechanics like Ninjutsu and Channel return, alongside Enchantment saga cards never before seen in Magic. And the NEO set is packed with Showcase art, from basic lands to Phyrexian and samurai treatments.

There are a total of three new and two returning MTG mechanics within the NEO set. 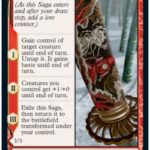 The NEO set is packed with cycles showcasing dragons, shrines, and more. Legendary creatures are once again showcased, but not as much as they were in the original Kamigawa block. And samurais, along with ninjas, take center stage at all different rarities.