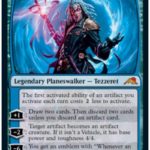 Kamigawa: Neon Dynasty marks the return of one of the key antagonists from Magic: The Gathering’s War of the Spark storyline to support the set’s major Artifact theme.

Tezzeret, the Blue-aligned artificer, has reappeared on Kamigawa and makes his return to Standard after rotating out with Core Set 2019 and War of the Spark.

This iteration of Tezzeret works well with the high number of Vehicles in the set while remaining effective in generic Artifact builds. There’s a chance that Tezzeret is the next four-mana Planeswalker to make an impact on Standard.

There are only seven Vehicles in Standard right now. Most of the support for Tezzeret will come from Neon Dynasty. Of the seven Vehicles in the format, only two might see play in a deck that also runs Tezzeret.

Esika’s Chariot is a Green Vehicle that’s already one of the best cards in the format. This card is tough to make work in a Tezzeret deck because it also occupies the four-drop spot, is easier to cast, and is more powerful on most battlefields.

Tezzeret is a value play that doesn’t immediately affect the battlefield or protect itself. The two cards might work in a midrange list that runs four Esika’s Chariot and two Tezzeret for late-game value in slower matchups.

Cosima, God of the Voyage // The Omenkeel would fit well into this strategy if it ends up leaning heavily into the Vehicles theme. The Omenkeel is easy to crew and almost guarantees a land drop every turn. The issue with The Omenkeel in Standard right now is that it’s far too slow.

The Omenkeel needs to be supported by strong turn one and turn three plays to make up for it being a somewhat lackluster option on turn two. If it works, The Omenkeel is an engine that exiles cards and gets lands.

Vehicles aren’t necessary to make Tezzeret work. The card might just fit into a Standard Artifacts and Enchantments build. Blue and White are colors that are receiving plenty of support for this strategy from both Innistrad sets. This has the potential to be a strong tempo deck using Spirits as evasive threats supported by disruption and card draw.

Tezzeret could be a key sideboard option when facing slower control matchups.

Experiment with Tezzeret and the new cards from Kamigawa: Neon Dynasty when the set drops on Magic Arena and Magic Online on Feb. 10. The full tabletop release will take place on Feb. 18.