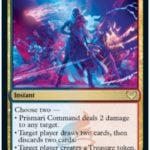 Wizards of the Coat revealed a cycle of college command Magic: The Gathering cards from the upcoming Strixhaven: School of Mages today.

WotC confirmed the Strixhaven leak from a Danish website earlier this week, officially releasing the names of the five colleges associated with the University. Additionally, the Magic team also spoiled a cycle of command cards tied to each of the colleges via the MTG Weekly series on Twitch and Daily MTG.

The five colleges—Lorehold, Prismari, Quandrix, Silverquill, and Witherbloom—were each named after the elder dragons that founded them. Each college has a representation of two colors within Magic.

Revealed today were five duel-colored “Command” spell cards that are thematically tied to each of the five colleges within the Strixhaven: School of Mages set. A wording change of “mana value” was introduced as new text going forward in Magic via two of the new cards spoiled today, replacing “converted mana cost.” Each of the five college command spell spoilers has four abilities listed, in which players can choose two upon casting.

Scheduled to release April 23, Strixhaven is the next Standard-legal set to drop in MTG.