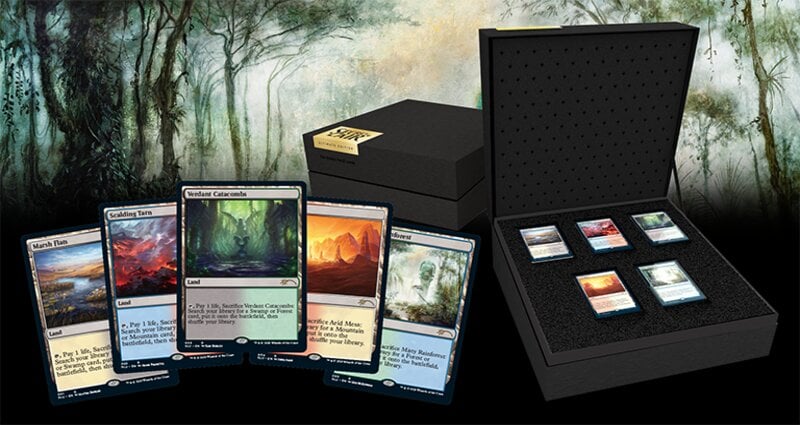 Five enemy Magic: The Gathering fetchland reprints with new art were revealed today. They were created by individual artists and will be dropping in WPN stores at the end of May.

Wizards of the Coast is flipping the script on Secret Lair drops with a new drop series that will feature one copy of five enemy fetchlands, available on May 29, only at local Wizard Play Network stores.

There won’t be any foil enemy fetchlands in the MTG Secret Lair Ultimate edition and only a limited number of these drop series fetchland sets will be available. They’ll be sold at any WPN store, anywhere around the globe, in a limited number of up to 10 copies. No price has been listed at this time, but the Magic Secret Lair Ultimate edition is expected to sell for a “bit more than $165,” according to WotC senior franchise communication manager Blake Rasmussen.

This isn’t the only place MTG fetchlands are getting reprinted this year. Future sales will be available at local game stores later in 2020, but not in a Standard set, according to Rasmussen.

Update April 14 2pm CT: Star City Games revealed the pre-order price for the MTG Secret Lair Ultimate edition yesterday. Priced at $332.49, the fetchlands were almost double the amount previously revealed by Rasmussen—and the Professor was quick to point out the price difference.

The COVID-19 pandemic has hurt local game store sales and players were expecting a slight increase to cover potential losses since there’s no longer an MSRP on Magic products. An increase to over $300 might be a bit on the high end, though, given the financial uncertainty many around the globe are facing.