The new and old come together to support growing archetypes. 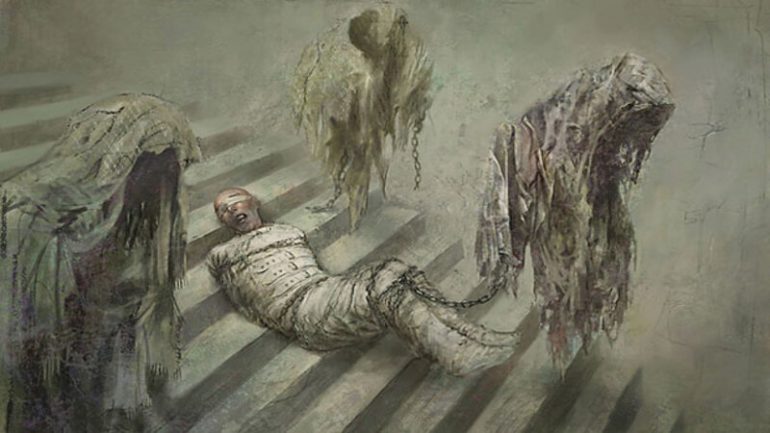 The spirits continue to flood like elementals in Magic: The Gathering Core Set 2020 with the addition of a reprinted Dungeon Geists while Black gains more control with the M20 Rare Legion’s End.

In a set that many claimed to be nothing more than filler, MTG Core Set 2020 continues to surprise the MTG community with a healthy dose of decent reprints and new cards.

Containing 280 cards, the M20 set is larger than previous Core Sets produced by Wizards of the Coast. And with this change comes cards like Legion’s End and a reprint of Dungeon Geists.

Costing two mana (one black), Legion’s End is a Rare removal sorcery card that hits an opponents battlefield and hand.

Legion’s End isn’t just a good card for the MTG Standard format, as it would work well in Modern too. Eliminating threats early on in the Modern Format is a game-changer and even a win-con.

Originally printed in Dark Ascension, Dungeon Geists is a three/three spirit flyer with the ability to tap an opponents creature for the duration Dungeon Geists in on the battlefield.

“When Dungeon Geists enters the battlefield, tap target creature an opponent controls. That creature doesn’t untap during its controller’s untap step for as long as you control Dungeon Geists.”

Dungeon Geists isn’t a super powered card, however, it’s a decent one to pick up in Limited Draft, and only costs four mana (double blue) to cast. Everything from the original Dungeon Geists transferred over to the reprint in M20, including the artwork illustrated by Niles Hamn.

Legion’s End and Dungeon Geists can be found in Magic: The Gathering Core Set 2020, set to release on July 12. Prior to the release date is a pre-release Draft from July 5 to 6, and digital players can enjoy M20 early on MTG Arena and Magic Online on July 2.