Token power gets a boost in Naya Populate deck. 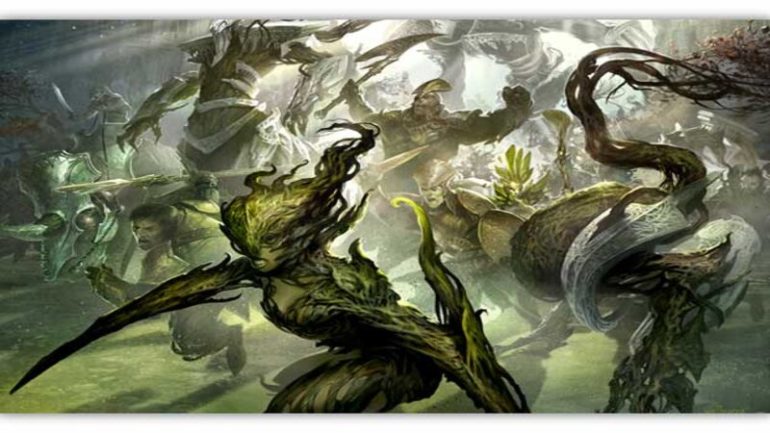 Token power has arrived in Commander 2019 with the MTG preconstructed Naya Populate deck.

Populate is a mechanic first introduced in the Return to Ravnica set, specifically for Selesnya token themed decks. Its primary function is to create copies of existing tokens on the battlefield. Within Commander 2019, Populate is expanding to include Red, along with Green and White, creating a more powerful presence with decent removal and card draw (Naya).

The Primal Genesis deck is the fastest of the four Commander 2019 preconstructed decks, especially early in the game. Board wipes will slow Primal Genesis down, along with card draws that are only Populate and removal—there are no tokens to copy after a board wipe takes place. These are big weaknesses within the Naya Populate deck, but its speed and power balance it out.

There are 17 new cards and 68 reprints within the preconstructed Primal Genesis deck.

The Commander of Primal Genesis is Ghired, Conclave Exile, and of all the commanders revealed so far, it’s the best concerning how it functions within the preconstructed deck. The planeswalker reprint, Garruk, Primal Hunter is included in Primal Genesis. Garruk works well with Ghired and the Populate mechanic by creating a three/three token with his plus-one loyalty counter.

Two other commanders are also included in the Commander 2019 preconstructed deck: Atla Palani, Nest Tender and Marisi, Breaker of the Coil. Palani works with the Populate theme best by creating a zero/one token egg for a small cost.

When that egg dies, Atla Palani, Nest Tender’s static ability allows a player to reveal cards off the top of their library until they find a creature card. That creature immediately enters the battlefield while the rest of the cards go to the bottom of that player’s library. Marisi, Breaker of the Coil works with Primal Genesis but would likely be a better fit in commanding its own deck.

Other cards within Primal Genesis that’ll have a major impact are Momentous Fall, which allows for a player to sacrifice tokens for card draw and life gain. Then there’s Dragonmaster Outcast, a powerful single Red mana creature card that creates a five/five flying dragon token at the beginning of upkeep if that player controls six or more lands. Exiling an opponent’s permanent is included in the copy, and when Poupulate is used on the token, multiple permanents can be exiled.

In addition, there’s Beast Within, a removal that destroys a target permanent and then creates a three/three token. It’s a necessary card in any Green deck, along with Angel of Sanctions, which exiles a target permanent while on the battlefield and uses the Embalm mechanic. This allows it to be exiled from the graveyard while creating a copy token of itself.

The ultimate win-con in Primal Genesis, however, is Second Harvest. It’s an instant that creates a copy of a tokens permanent for each token a player controls. And if Second Harvest isn’t drawn, perhaps Song of the Worldsoul will get the job done. Every time a player casts a spell, they can Populate.

Primal Genesis is one of four preconstructed decks available with Commander 2019. The new MTG Commander set will be released on Aug. 19