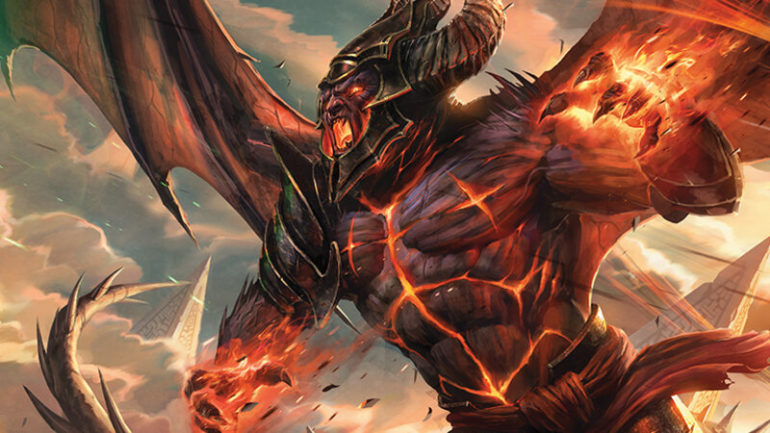 Discard and cast for an alternate cost is the name of the game with a touch of a Rakdos demon in the Commander 2019 preconstructed deck, Merciless Rage.

The mechanic Madness was first introduced to MTG in the Torment set from the Odyssey block. It’s an ability that allows a player to cast a spell with an alternate cost, similar to Spectacle in Standard right now. Except with Madness, the alt cost is paid when a card is discarded.

For Madness to function properly, there needs to be a commander who has total synergy with other Madness mechanic cards. And the Commander 2019 Merciless Rage deck has that with Anje Falkenrath.

Within Merciless Rage, there are a total of 17 new cards and 63 reprints. Much like the other preconstructed decks, the number of new cards is slightly disappointing, but the stats are put together to form a powerful out-of-the-box deck.

Every Commander 2019 preconstructed deck comes with a planeswalker, and the one in Merciless Rage is Ob Nixilis Reignited. While his ultimate is on the weak side, the plus one and minus three fit nicely. In addition, there are a few expensive mana cost cards to cast, but extremely useful.

Geth, Lord of the Vault steals from your opponent’s graveyard for an X cost (converted mana) and one black mana. Once a card is chosen, the opponent then gets milled for X cards. It’s also a five/five that has the mechanic Intimidate in which it can’t be blocked (with the exception of artifacts and creatures that share its color).

Meanwhile, Overseer of the Damned is a five/five flyer who creates a tapped two/two token when an Opponent’s nontoken creature dies.

Under the Madness theme within Merciless Rage, there are cards like Big Game Hunter. This one/one assassin destroys a target creature with a power of four or greater. It then has a madness cost of only one black mana. For cheap removal that can pay off in two different ways, Big Game Hunter is an ideal fit in the Radkos Madness preconstructed deck.

Then there is Aeon Engine. While it doesn’t necessarily fit the Madness theme, it’s an artifact card no Commander player sitting next to you wants to see. With instant speed, a player can tap Aeon Engine and reverse the order in which players take their turns.

Chainer, Nightmare Adept, however, is likely the most important card within the preconstructed Merciless Rage deck. Not only is it a commander in its own right, but it fits perfectly with the Madness theme. His static ability has the player discard a card (enter Madness mechanic) and then have the ability to cast a card from the graveyard. Nontoken creatures that are cast from the graveyard come onto the battlefield with haste. Sadly, the ability with Chainer, Nightmare Adept may only be used once per turn.

Merciless Rage is one of four preconstructed decks available with Commander 2019. The new MTG Commander set will be released on Aug. 19