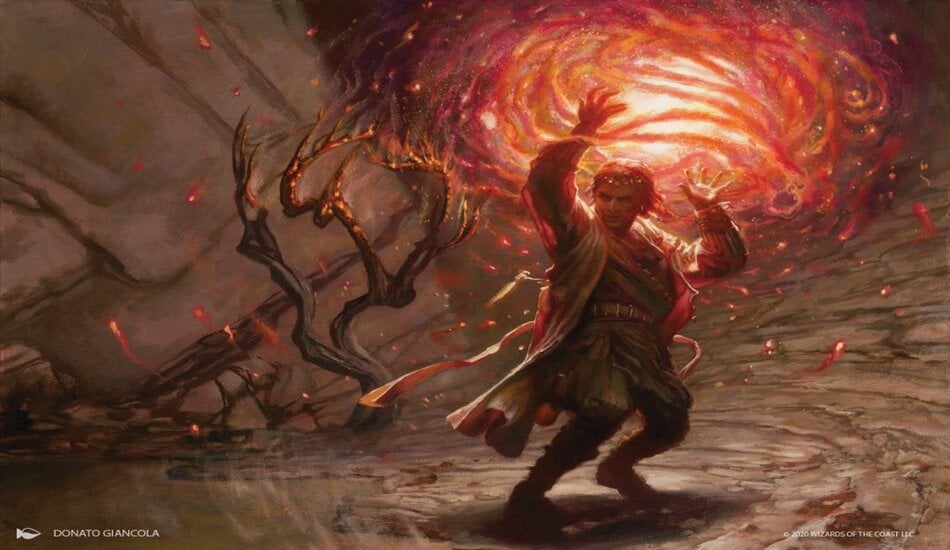 Details regarding the June update in MTG Arena and beyond were revealed today by Wizards of the Coast, including a reprint plan, preparation for fall rotation, and more.

The next update in MTG Arena will take place on June 25 with the addition of Core Set 2021. But the June State of the Game post included details that go beyond the M21 set, revealing that Amonkhet Remasters will drop in August with over 300 cards to the Historic format and a plan for dealing with reprints in Arena. The notes also included the 20 Jumpstart cards getting replaced and Brawl becoming a full-time free-to-play game mode with the cancelation of Brawlers’ Guildhall.

Spoilers for M21 have come to an end and the set will drop in MTG Arena on June 25 with the next major update. In addition to the M21 set going Live, Arena will also become available to play on Mac for the first time since the digital card game’s release.

Several Rare cards in the M21 set are reprints with the same art as previous versions. This caused concern in the Magic community, leading to an announcement from WotC today that addresses the issue. A full rundown of the new reprint policy can be found here.

Players will only receive a copy of a fully-reprinted Rare card in a booster pack if they don’t have four copies of that card already with the same name and artwork. Players who have four copies of a Rare or Mythic Rare that’s reprinted with the same name and art will only receive additional copies once they own playsets of all other Rare and Mythic Rare cards from that set.

The reprint change won’t impact Limited boosters and only applies to Rare and Mythic Rare cards. Jumpstart cards are being treated as a part of M21 for anything that affects duplicate protection and distribution rate.

Jumpstart will launch in MTG Arena on July 16, containing 20 swapped cards that differ from the tabletop prints. A full list of those cards and a breakdown of Jumpstart being added to Arena can be found here.

As of July 1, Brawlers’ Guildhall will be removed from MTG Arena and Standard Brawl will become a permanent mode that’s free-to-play. Players will still earn daily wins and quest progress playing the mode and will have access to it 24/7.

WotC isn’t making the same move with Historic Brawl, however. A full rundown of Brawl becoming a permanent mode and what the future looks like for Historic Brawl can be found here.

Rotation in Standard is rapidly approaching. Over the next couple of months, Arena will make several changes toward rotating events, Individual Card Rewards (IRCs), and new player decks. There will also be messaging when crafting a card, or opening a booster pack, that’s rotating out in the fall. A full calendar breakdown of the months leading up to the Standard fall rotation can be found here.

WotC revealed today that Amonkhet Remastered will be added to MTG Arena sometime in August. The set will include over 300 cards being added to the Historic format. No other details were released at this time.

Several quality-of-life improvements are being made to the MTG Arena deck builder in the June 25 update. These include updates to the Advance Filters, new tools for deck building in Draft and Sealed events, color identity, and the ability to expand the amount of space used when viewing via the horizontal layout.