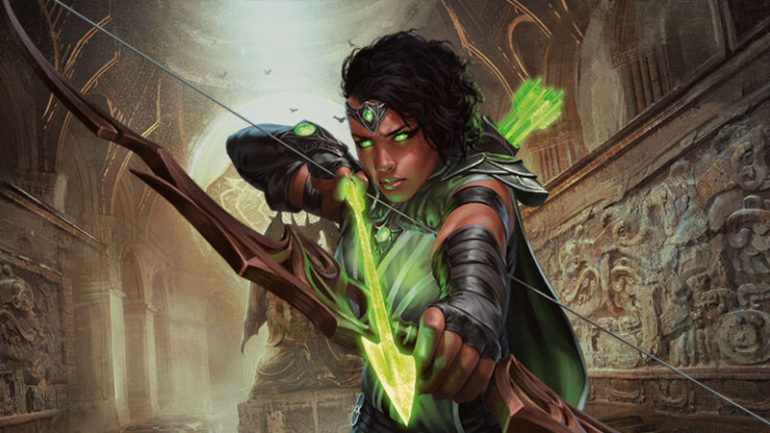 As day two of Magic: The Gathering Mythic Championship continues to heat up with the hottest decks in Standard, Vivien, Arkbow Ranger from Core Set 2020 was revealed. Vivien is also featured in the MTG Planeswalker pre-constructed decks with Vivien, Nature’s Avenger.

Costing four mana (triple green) to cast, Vivien, Arkbow Ranger does what most would expect from a Vivien planeswalker card—strengthen, remove, and find a card. With her plus one loyalty counter, Vivien places a plus one/plus one counter on up to two target creatures and gives them trample until the end of turn.

Vivien, Arkbow Ranger’s minus ability costs three loyalty counters and is a removal, having a target creature you control deal damage to your opponent’s target planeswalker or creature.

Vivien, Arkbow Ranger’s ultimate costs minus-five loyalty counters after beginning with four. Her ultimate allows a player to choose a creature they own or from outside the game, reveal it, and then put it in hand.

The two issues with the M20 Vivien, Arkbow Ranger planeswalker are her triple green mana cost (which can be solved through green ramp) and her starting loyalty count of four. While neither issue will prevent her from being played in decks, she’ll likely end up in sideboards as opposed to the main deck (unless you’re playing Mono-Green).

Magic: The Gathering Core Set 2020 will be released on July 12 and July 2 via MTG Arena.