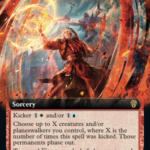 Dominaria United could be somewhat of a Magic: The Gathering family reunion, bringing many key figures from Magic‘s story in the past to the game’s original plane.

Jaya Ballard is a master pyromancer that’s been a figure in Magic lore since Ice Age. Jaya appeared in Dominaria as Jaya Ballard, a solid five-mana Planeswalker that failed to see much competitive play, but has a home in spellslinger Commander decks.

The pyromancer returns in Dominaria United as one of the key Planeswalker characters alongside Teferi and Ajani. Jaya, Fiery Negotiator is a four-mana Planeswalker with four abilities, making her a versatile option for Red decks. A kicker spell was also previewed featuring Jaya as the centerpiece in Temporal Firestorm. 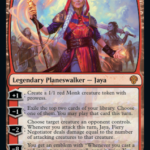 Jaya does just about everything a Red deck wants to do. She can Create a Creature with a +1 ability. A 1/1 with prowess can become a serious threat in a spell-heavy build. The -1 is a great source of impulse card draw at only -1 loyalty. These two abilities suggest there will be a prowess deck that will emerge when Dominaria United releases.

The -2 is an interesting ability that rewards go-wide Creature builds. It can help Red decks, that generally struggle to take down large Creatures, by providing a burst of damage based on the number of attacking Creatures. A low-to-the-ground Red deck probably doesn’t want a playset of Jaya because she’s so expensive. One or two copies feel like a sweet spot.

The -8 ultimate wins the game. It doesn’t seem that difficult to get to. Jaya could be an option in a Jeskai Control build. She makes blockers, draws cards, and has a removal ability. If Jaya can be protected, it’s not unreasonable Jaya will reach eight loyalty. 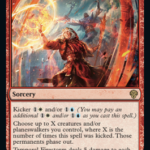 This is a powerful card in Limited that should be impactful in Standard. The board wipe ability is similar to Burn Down the House which frequently sees Standard play. Five damage to all Creatures and Planeswalkers deals with most threats in the format.

Kicker is expensive, but it’s nice that it can be paid with either White or Blue mana. Even protecting one of your threats can swing the game in your favor. Seven mana to clear the battlefield and leave you with something is a worthwhile deal.