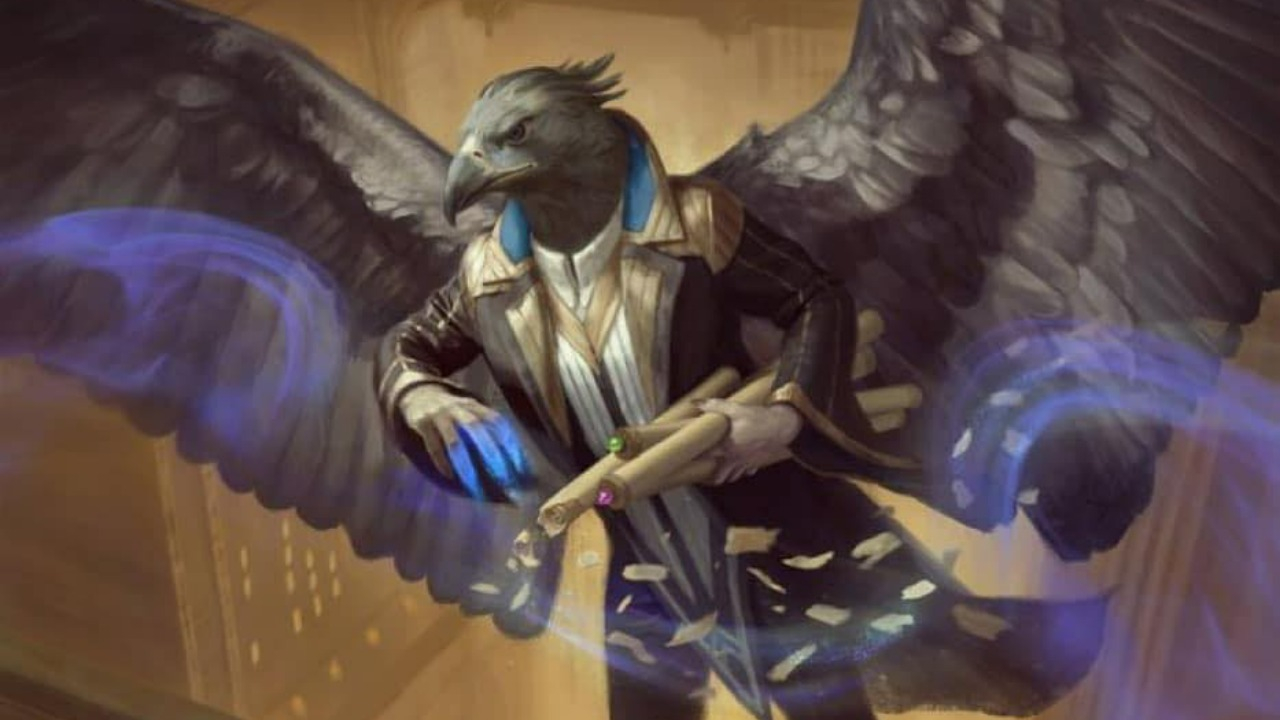 With Magic the Gathering rotation coming in September, Standard is in a holding pattern for the time being. Many of the format’s established archetypes are refined after the release of Streets of New Capenna.

The set had a major impact on Standard, enabling a handful of three-color archetypes. Grixis Vampires and Esper Control had strong showings at the last major Standard event, the New Capenna Championship. Bant and Jund midrange strategies have a solid foothold in Standard too because of the additions from New Capenna and longstanding staples like The Wandering Emperor and The Meathook Massacre.

One archetype that sprung up from New Capenna is a Blue and White tempo build that takes advantage of the phasing mechanic, protection spells, and two key Creatures from New Capenna: Ledger Shredder and Illuminator Virtuoso.

The pair of two-mana Creatures are the center of this strategy. A mix of Bogles and the famed Mono-Blue Tempo deck popularized by Autumn Burchett in 2019, the goal of the deck is to stick a threat onto the battlefield and protect it.

Ledger Shredder is a multiformat all-star making its mark in Modern and Legacy. The flying threat is similar to Tarmogoyf in its ability to scale as the game goes on. It punishes the opponent for double spelling and rewards you for doing the same.

Illuminator Virtuoso can win the game by itself. The double strike makes it an effective blocker and easily capable of dishing out 10+ damage in one combat step. The connive trigger each time it’s targeted by a spell is a strong source of card draw that finds more protection spells.

Stormchaser Drake is another four-of Creature. It doesn’t naturally get bigger like Ledger Shredder and Illuminator Virtuoso, but it does draw a card each time it’s targeted by a spell and can fly.

These cards are protected by five main deck spells that trigger your Creatures and blank opposing removal spells.

March of Swirling Mist and Slip Out the Back phases Creatures out. You See a Guard Approach gives a Creature hexproof. Boon of Safety gives a shield counter. Sejiri Shelter provides protection from a color while also being a land.

One of the most important cards in the deck is Security Bypass. It makes a Creature unblockable when it attacks alone and connives when it deals combat damage to an opponent. It’s a great card that stops the opponent from chump blocking or killing your Creature in combat. This deck doesn’t have any access to trample, so getting past blockers with evasion is a must.

Homestead Courage doesn’t protect anything, but it does give a Creature a +1/+1 counter and Vigilance. Flashback allows it to be used twice. It can be a good discard target for connive and lets you attack without needing to worry about dying on the crackback.

There are two other Creatures in the 75 that aren’t four-ofs. Guardian of Faith ia a surprise blocker that also protects other Creatures by phasing them out. Mavinda, Students’ Advocate lets you reuse your protection spells. It’s more of a late-game play which is why there are only two copies in the deck.

The core strategy is to play a threat and protect it. The three playsets of two-mana Creatures become unstoppable as the game goes on, but are easy to remove without protection. Stormchaser Drake and Illuminator Virtuoso die to every removal spell in the format because of their low toughness. Ledger Shredder is a little beefier with three toughness but is still vulnerable to the majority of removal.

Against most matchups, you’ll want to play out your Creature on turn three or four. The deck wants to establish a lead early and extend it, but rushing out these fragile Creatures is not effective. Casting Illuminator Virtuoso on turn two and having it killed by a Spikefield Hazard is a huge tempo hit. Saving your Creature for turn three and having a Slip Out the Back ready will stop the opponent’s first attempt at removing it.

Once that first effort is stymied you’re in a good position.

Waiting for turn three isn’t too bad. Since the deck is running four copies of both Sejiri Shelter and Jwari Disruption, spending the first two turns running out a tap land won’t hurt. They are also useful spells. Sejiri Shelter is useful in every situation. Protection gets through blockers, targeted removal, and board wipes.

Jwari Disruption can counter spells that go over the top with expensive tap-out threats you’ll struggle to deal with. The deck can’t effectively stop Goldspan Dragon or The Kami War once they resolve.

It also rewards matchup knowledge in game one. Jwari Disruption is the only main-deck counterspell. There are several decks in Standard that have valuable early plays. Countering something like Fable of the Mirror-Breaker can delay an opposing deck just enough to set you up for success.

March of Swirling Mist and Slip Out the Back aren’t only for protecting your own spells. In key situations, they can be used to clear out the opponent’s blockers or prevent a lethal attack. You won’t always use them for this reason, but it’s a nice option to have.

As with all sideboards, it should be adjusted frequently to combat the meta. When sideboarding you don’t want to dilute the gameplan too much. This deck has a clear goal and has no way to win outside of its core strategy.

Try to always keep the five protection spells in games two and three. The opponent will bring in more removal spells so it’s important to be prepared for that.

March of Otherworldly Light, Fading Hope, and Valorous Stance are in the sideboard to deal with Creatures. March of Otherworldy Light is the best out of the removal suite because of how it scales and its versatility.

The sideboard is packed with counterspells. These are cheap and effective. It’s primarily focused on countering Creatures because the protection spells can mostly deal with noncreature spells that affect you. Essence Capture is excellent because it can counter a Creature and buff one of yours.

The Restoration of Elganjo is there for the second chapter. It helps deal with decks that run a ridiculous amount of removal. Sometimes you’ll be caught without an answer and this saga will reanimate a Creature. All of your essential threats cost two mana.

The extra copies of Guardian of Faith are there to deal with decks running sweepers like Doomskar or Burn Down the House.

Jeskai Hinata is the worst matchup followed by Mono-White Aggro. Hinata, Dawn Crowned makes all of our spells cost one more. If the opponent resolves a Hinata it’s basically game over.

Thalia, Guardian of Thraben and Elite Spellbinder are why Mono-White Aggro is the deck’s second-toughest matchup. Aside from those two backbreaking cards, you can deal with any number of Brutal Cathar and Skyclave Apparition triggers with phasing or hexproof. The matchup gets better after sideboarding when you have access to March of Otherworldy Light and more counterspells. Dealing with Thalia or Luminarch Aspirant quickly is the key to winning the matchup.

Discard decks are hard to beat, but they’re rare in the meta as of the release of Streets of New Capenna. Be aware of hand disruption in the format’s popular decks.The lack of card draw in this list means you will struggle to refill your hand after a torrent of discard spells.

Grixis and U/W control builds can be problematic because of their late-game inevitability. At a certain point, those decks are going to cast a Jin-Gitaxias, Reality Hacker; or any number of control finishers that you can’t overcome. Creature lands can also be an issue, but generally, you can win in combat.

U/W Phasing feasts on Mono Red and Mono Black. Mono Black’s removal spells won’t be effective and its Creature suite is hardly anything to worry about. Inoke Despair can be a problem, but Phasing can help you avoid sacrificing your threat. Mono-Red will not be able to kill your Creatures. As long as you’re able to withstand the initial blitz the game turns heavily in your favor.

Other matchups will come down to who can establish themselves first. Decks like Giada Angels or G/R Midrange can snowball hard, but if you can get on the board early the odds shift in your favor. Being on the play is important for these matchups.

The main deck is almost rotation-proof. Seven cards in the main deck are rotating in the fall. These are:

The core of the deck remains intact. You still have access to the majority of protection spells and the two most important Creatures in Ledger Shredder and Illuminator Virtuoso.

The rotating cards will likely be replaced by spells introduced in Dominaria United in September. The mana doesn’t get much worse. Losing the pathway lands is rough, but it can be replaced by basics.