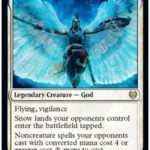 A total of seven Modal Double-Faced Gods with a Rare rarity are featured in the upcoming Magic: The Gathering Standard-legal set, Kaldheim.

There are 12 Gods within the Kaldheim set, five of which that are Mythic Rare and seven that are Rare. Unlike Gods in previous MTG sets, they aren’t indestructible and all 12 are MDFC’s. The seven Rare KHM Gods are Cosima, Reidane, Egon, Tergrid, Kolvori, Jorn, and _.

Each of these Gods features a legendary Artifact on their backside, providing synergy for that God’s main ability. From Gods that require the exiling of cards, to a player’s graveyard to remain on the battlefield to voyages that pump stats, here are the seven Rare MTG Gods within Kaldheim.

Cosima, God of the Voyage

Packed with text and value, Cosima, God of the Voyage is a three-drop God who takes off on an expedition at the beginning of a player’s upkeep and returns later in the game pumped up with +1/+1 counters. An option to return Cosima takes place whenever a land enters the battlefield, but the longer she remains away, the stronger she gets. Each turn she remains in exile, and a land was played, Cosima gains a voyage counter.

There’s also the added bonus of card draw upon her return, where the number of cards drawn increases with the number of voyage counters, just like her +1/+1 pump. Cosima, God of the Voyage slots nicely into Control builds and synergizes well with tribal vehicle builds in Commander due to her backside Artifact, The Omenkeel.

The Omenkeel is a legendary Artifact that ensures there are lands to play while Cosima, God of the Voyage is off exploring the plane in exile. It’s also a cheap vehicle that only takes one to Crew with solid 3/3 stats.

His 6/6 stats in conjunction with Deathtouch is overkill, but being able to hit to face for six if your opponent refuses to block is solid. Egon, God of Death will likely find a home within the Historic format but may get played in Standard as well. On the backside of Egon, God of Death is his Artifact, providing synergy via mill.

Throne of Death is a one-drop Artifact that mills a card at the beginning of that player’s upkeep, providing fuel for Egon, God of Death when he enters the battlefield. The legendary Artifact supports mill builds but suffers when in hand during the late-game stage.

Throne of Death does have a second ability that allows the player to draw a card, but this requires a cost of 2(B) and exiling a creature that would normally be exiled for Egon instead.

The keyword Menace returns to KHM via Tergrid, God of Fright. Capitalizing upon cards an opponent places in their graveyard via sacrifice or discard, Tergrid lets her controller take those cards from an opponent’s graveyard and put them onto the battlefield under their control.

Tergrid won’t likely see play in Standard but may find builds within Commander. Her stats are solid for a five-drop and her backside forces opponents to sacrifice or discard.

Legendary matters with Kolvori, God of Kinship, as the God MDFC receives a strong pump and acquires the keyword Vigilance when three or more legendary creatures are on the battlefield. Due to the number of legendary creatures within the KHM, Kolvori may get played within the Standard format, and also slots nicely into a number of Commander legendary-themed decks as well.

Kolvori’s stats are decent for a four-drop but improve greatly when played within a legendary-themed build. Her ability to search for a legendary in a player’s library is also a nice added touch.

The Ringhart Crest supports Kolvori, God of Kinship within creature heavy builds and acts as a mana rock. It also synergizes well with MTG cards like Questing Beast and Yorvo, Lord of Garenbrig.

Synergizing with Snow lands, attacking with Jorn, God of Winter triggers all Snow permanents that player controls to untap. This includes Jorn, essentially giving him Vigilance when he attacks. Jorn, God of Winter has the potential to be busted within the Standard format and synergizes nicely with The World Tree.

Supporting Jorn, God of Winter, Kaldring, the Rimestaff brings back Snow permanents from the player’s graveyard. The Snow permanents come into play tapped but will untap that turn if Jorn attacks.

Reidane, God of the Worthy

Reidane, God of the Worthy has main deck potential in Standard and will likely end up as a staple sideboard card in any deck running or splashing White. Reidane’s stats, three-drop 2/3 with Flying and Vigilance are solid, especially in Limited. But it’s Reidane’s passive ability to force your opponents Snow lands to enter the battlefield tapped that really has this God standing out from the crowd in Standard.

Valkmira, Protector’s Shield has a high casting cost for Artifact that hurts Aggro decks with an abundance of burn spells. Preventing damage at a cost to an opponent, which in this case is one mana, only works well during the early-game when an opponent doesn’t have mana to spare. And preventing one damage from a source an opponent controls only has an impact against cheap burn spells found in Aggro builds.

Birgi, God of Tales slots ideally into a Red or RW aggro build utilizing the new KHM mechanic, Boast. In Red, there are cards like Frenzied Raider, who gains a +1/+1 pump every time its controller activates a Boast ability. There’s also Fearless Liberator, who creates a 2/1 Dwarf Berserker token when Boast is activated.

White Boast cards that synergize with Birgi, God of Tales include Battleshield Warrior, Axgard Braggart, and Goldmaw Champion. Birgi’s first ability, adding Red mana when you cast a spell, helps pay for the Boast cost. A three-drop 3/3 is solid in Limited on its own. Add in Birgi’s two additional abilities and cards that synergize with her and she’s a top pick in Draft.

Harnfel, Horn of Abundance has a high cost to cast but synergizes nicely with Birgi during the late-game stage of a match. In an Aggro build, playing two cards from the library at the cost of discarding one from hand is a good deal. Aggro decks tend to run out of gas during the late stage of a match, losing advantage. And if Birgi is already on the battlefield, casting Harnfel can assist in gaining board state advantage back.