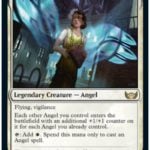 Commander players have an abundance of Magic: the Gathering legendary creatures to choose from with the release Streets of New Capenna and the five Precon Commander decks.

In addition to the abundance of legendary creatures, the NCC decks contain a good number of non-legendary new cards that can support existing and new Commander decks. And some of them are even worth money on the secondary market.

Not every legendary creature makes a good commander, but there are eight that are standing out from the others. From cats and rhinos to angels and vampires, here are the best New Capenna legendary creatures for the Magic Commander format.

Mr. Orfeo, the Boulder has a great name and a powerful ability that synergizes with creature-heavy Commander decks. The rhino’s stats are fine for a four-drop. And his ability to double a creature’s attacking power until the end of the turn upon attacking is unique and has potential. His ability also synergizes with Fling shenanigans.

Cats continue their quest to dominate via Kitt Kanto, Mayhem Diva. The NCC legendary supports and synergizes with her Naya colors, creating a 1/1 token upon entering the battlefield. She also uses the MTG Goad mechanic, forcing your opponents to attack one another, instead of you.

Playing your opponent’s cards might not win friends but it can win games with Evelyn, the Covetous. Great in vampire tribal decks, the legendary rogue has Flash, exiling the top card of each player’s library with a collection counter on it. You may then play a card from exile that has a collection counter on it but only once per turn. And Evelyn, the Covetous has solid stats, able to block most creatures that attempt to attack.

Mill players are rejoicing with the release of Lord Xander, the Collector while the rest of your Commander friends are ready to disown you as a friend. Able to mill an opponent’s deck by half upon ETB, attacking, and death—the Maestro leader is all about self-preservation. Xander is a unique MTG legendary commander that will likely see play despite most players’ hatred towards mill synergies.

Toluz, Clever Conductor is one of the best New Capenna hybrid legendary creatures with an ability similar to Bag of Holding, but better. The human rogue uses the SNC mechanic Connive to loot, putting all discarded cards in exile. When Toluz, Clever Conductor dies, and she will with 3/1 stats, all your exiled cards return to your hand.

Blitz is a new SNC mechanic that has potential in the Commander format with Henzie “Toolbox” Torre as the commander. The devil rogue gives all creatures with a power level of four or greater Blitz, and each time the “Toolbox” is cast from the command zone, Blitz costs are reduced by one less. Henzie slots nicely into creature-heavy ramp decks, along with sacrifice builds via the colors Black and Red.

Giada, Font of Hope is one of the best two-drop angels in possibly all of Magic. The halo maker has Flying and Vigilance, but weak 2/2 stats. Her purpose, though, is to pump angels as they enter the battlefield with a +1/+1 counter for each angel you already control. You can also spend W and tap Giada to help cast angel spells. Every angel scales in power with Giada, Font of Hope, and she is easy to recast from the command zone if she gets taken out.