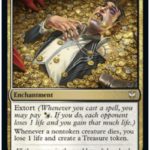 A total of five Precon Commander decks were released with Streets of New Capenna, containing a number of new playable Magic: The Gathering cards within the Commander format.

The five Streets of New Capenna (NCC) Precon Commander decks showcase three-color commanders that synergize with the five crime boss families featured in the Standard-legal set. Some are worth purchasing, especially for newer and casual players. And there are NCC cards within the Precons that are worth money on the secondary market. But for players seeking to improve existing Commander decks they own, there are a total of eight Monocolored cards worth exploring.

Slotting into any MTG Commander decks that run primarily White as a color, Smuggler’s Share is a three-drop Enchantment that can draw cards. It can also create a Treasure token, but both effects are dependent on your opponent. You get to draw a card if your opponent drew two or more cards this turn, which is fairly common. And Smuggler’s Share makes a Treasure token if your opponent had two or more lands enter the battlefield this turn.

Aerial Extortionist is a five-drop Flying creature in Mono-White with 4/3 baseline stats. The bird soldier exiles a non-land permanent upon entering the battlefield or when it does combat damage. If you exile an opponent’s non-land permanent, they may cast it from exile. Whenever another player casts a spell from anywhere other than their hand and Aerial Extortionist is on the battlefield, you get to draw a card. The bird is a great stall creature with Flying and decent stats that can also create card advantage.

Synergizing with Aggro and creature-heavy decks, Family’s Favor is a three-drop Rare Enchantment. It throws a Shield Counter on an attacking creature that can draw cards for you if that creature deals combat damage to an opponent. And while it may not always deal combat damage to an opponent, unless you have evasive creatures, the Shield Counter will protect your attacking creature from trades and chump blocks/combat tricks.

Lethal Scheme is an Instant Mono-Black removal spell that can get cast for zero mana. The Rare New Capenna Precon Commander card has the Convoke mechanic, allowing creatures you control on the battlefield to tap for mana to cast Lethal Scheme.

Once cast, it destroys a target creature or planeswalker, and each creature that convoked to cast it Connives. The color Black has great Connive synergy and the only downfall to Lethal Scheme is that you need a decent board presence to get the most out of it.

Life of the Party

Slotting into creature-heavy builds is Life of the Party, a New Capenna Precon Rare that has First Strike, Trample, and Haste. The elemental gains +X/+0 until the end of the turn, where “X” equals the number of creatures you control. It also creates tokens of itself for your opponents upon entering the battlefield, giving those tokens Goad; forcing your opponents to attack one another with the tokens and not you.

Slotting into Aristocrat Commander builds with drain and gain synergy is Life Insurance. The Orzhov Enchantment has Extort, allowing you to pay either White or Black to drain your opponent for one life while you gain one life. Life Insurance also synergizes with sacrifice synergy decks, as whenever a token creature dies, you lose one life and create a Treasure token.

Synergizing with Treasure and tokens, Indulge//Excess is a solid Sorcery speed spell with a rarity of Rare. The New Capenna Precon Commander card provides two options for you, wither creating a 1/1 citizen token that’s tapped and attacking when you attack. Or, via Excess, creates a Treasure token for each creature you controlled that dealt combat damage to a player this turn. And Excess also has the MTG mechanic Aftermath, allowing you to cast the spell from your graveyard should you choose to cast Indulge first.