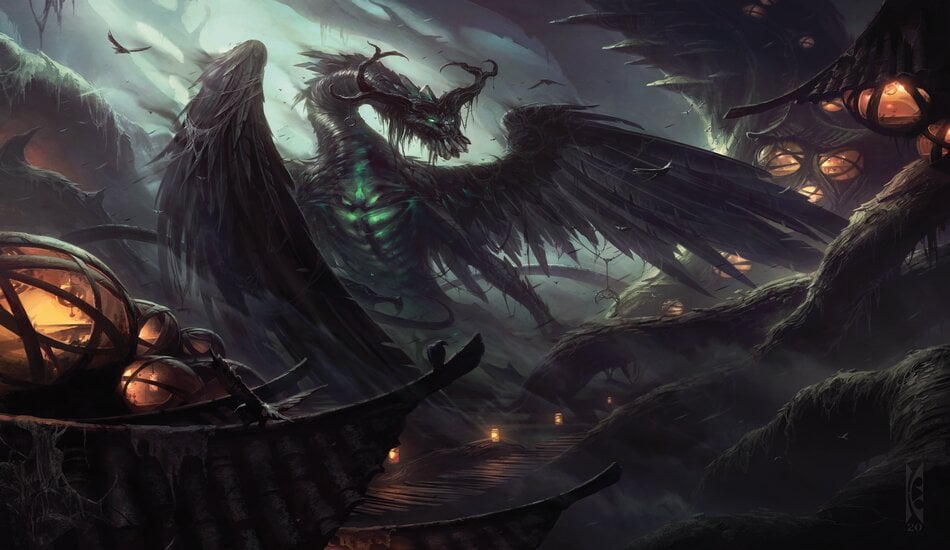 Black and Green Sacrifice synergies have the potential to be one of the strongest Strixhaven: School of Mages archetypes in the MTG Limited format.

There are a total of five colleges within the STX set, each featuring an enemy color pair. And each college features two themes that players can build around while drafting. Witherbloom College has two main themes: Lifegain and Sacrifice.

Both themes are solid choices, with Sacrifice potentially being the stronger of the two. Witherbloom College’s mascot is Pests, creature tokens that provide its controller with one life gain upon its death—fueling both synergies in the Witherbloom archetype. 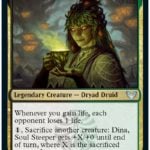 Due to each college having two themes, there are two Draft archetype support cards within Witherbloom: Dina, Soul Steeper, and Blood Researcher.

Dina, Soul Steeper is an Uncommon Legendary that fuels both Lifegain and Sacrifice synergies. Blood Researcher is the weaker archetype support card in Witherbloom, benefiting from Lifegain synergy. 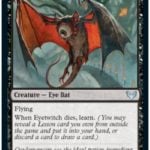 Eyetwitch is the best one-drop to pick up when crafting a Witherbloom deck. It’s a 1/1 creature with Flying that activates Learn when it dies. Unwilling Ingredient is another solid one-drop target to sacrifice, using its activated ability from the graveyard for card draw. And Brackish Trudge can keep coming back after being sacrificed, at a small cost of gaining life and paying 1B. But the best creatures to sacrifice are pests. 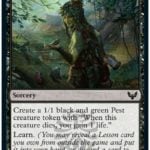 Pest Summoning is one of the best spells in Witherbloom and it’s also a Lesson, allowing players to pull it from their sideboards with an STX spell that has Learn. Hunt for Specimens is a cheap two-drop that summons a Pest token and is also a spell with Learn. And Professor of Zoomancy is a four-drop creature that creates a Pest token upon entering the battlefield. 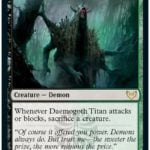 There are three creatures in Witherbloom that have major payoffs within the Sacrifice theme: Daemogoth Titan (Rare), Daemogoth Woe-Eater (Uncommon), and Bayou Groff (Common).

Daemogoth Titan is a bomb four-drop pick, as long as there are creatures around to sacrifice. And once those creatures run out, Tend the Pests can turn the Titan into 11 Pest tokens.

Bayou Groff combos well with Eyetwitch and Unwilling Ingredient and Daemogoth Woe-Eater is another powerful four-drop. Similar to the Titan, Woe-Eater requires a sacrifice to have an impact on the battlefield. Upon getting sacrificed, Daemogoth Woe-Eater forces an opponent to discard a card while you draw a card and gain two life. 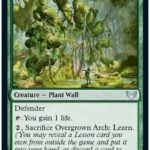 Lifegain synergy can pump a creature’s stats, trigger abilities, and reduce the cost of removal in Witherbloom. In addition to killing off or sacrificing Pest tokens for Lifegain, Overgrown Arch is one of the best cards to gain life from. The Plant Wall is an 0/4 Defender who can tap to gain one life. Witherbloom Apprentice can also provide Lifegain via the new STX mechanic, Magecraft. 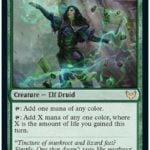 Mortality Spear has the potential to become one of the best removal cards in STX Limited, costing two less to cast if its controller gained life the turn it’s cast. The removal spell is an Instant that destroys a target nonland permanent. There are even combat tricks that synergize with Lifegain, such as Fortifying Draught. Players can pump a creature +X/+X where “X” is equal to life gained that turn, of which Fortifying Draught provides two life points gained. 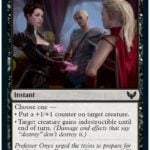 Witherbloom College is weak to removal, which can disrupt Lifegain and Sacrifice synergies. There are three main cards that players can use to protect and revive key creatures: Professor’s Warning, Infuse with Vitality, and Deadly Brew.

Infuse with Vitality is unique, granting a creature Deathtouch and when it dies, it returns to the battlefield. The Instant also provides Lifegain. Professor’s Warning can either place a +1/+1 counter on a creature or give it Indestructible until the end of turn. And Deadly Brew returns a permanent card from the graveyard to hand when each player sacrifices a creature or Planeswalker.