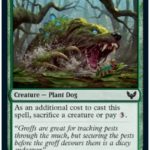 The color Green in Magic: The Gathering has continued its dominance within the Limited format following the release of Strixhaven: School of Mages.

Green in STX is so packed with value that even its most vanilla card deserves an honorable mention. Spined Karok is a simple three-drop with solid stats that will fit within the Witherbloom and Quandrix archetypes. Mage Duel has potential but can also become a trap while Charge Through is one of the better one-drop combat tricks within STX.

From ramp and Lifegain to removal and tokens, here are the nine best Green cards in STX Limited.

Overgrown Arch pairs exceptionally well with Dina, Soul Steeper, and Mortality Spear. The synergy created from Black and Green, removal, and Lifegain, might rank Witherbloom as one of the strongest archetypes in STX Limited. Overgrown Arch can also work in Quandrix builds, utilizing Lifegain to buy time.

Professor of Zoomancy has the potential to become the best Limited Green Common in STX.

Pest creature tokens are extremely valuable within a Witherbloom deck, since they’re able to provide Lifegain. The token can also be used with sacrifice synergies or as a chump blocker packed with value. Professor of Zoomancy is a solid four-drop that can quickly stabilize a board state or overrun your opponent.

Designed specifically for the Quandrix ramp build, Bookwurm is a finisher. It also slots in as a splash within Control decks.

Bookwurm is packed with value: Trample, Return, Lifegain, and card draw. It’s also an eight drop. The Wurm is a bomb in Sealed but only slots into a couple of specific Limited archetypes. It’s not a pack one first-pick but it has the potential to be a first-pick in later packs.

Bayou Groff is potentially the best Limited card in STX or just a mediocre 5/4 for five.

Ideal within a Witherbloom sacrifice deck and Aggro builds, Bayou Groff ends games quickly when played as a two-drop. Eyetwitch is an ideal one-drop to sacrifice, pulling a Lesson from outside the game—as are Pest tokens, synergizing with the Lifegain theme. Silverquill builds can also take advantage of the Dog by sacrificing cards like Professor of Symbology and Star Pupil. And it can even work in Quandrix decks. Fail to get it out prior to turn four, though, and Bayou Groff loses all its value.

Emergent Sequence is what Quandrix builds want: ramp with the added value of creature who has Counters.

The Quandrix archetype is all about getting to eight mana, and Emergent Sequence is the ideal spell to help players achieve their archetype goals. It’s a Sorcery spell that puts a land immediately onto the battlefield (tapped) while also creating a 2/2 creature token. For a two-mana casting cost, Emergent Sequence is pure value.

Honor Troll packs a punch while synergizing with Lifegain themes found in the Witherbloom archetype. It gains its controller an additional life point while triggering Lifegain synergies, and when a player happens to crest 25 life points, the Troll pumps himself +2/+1. The overachieving Honor Troll is a three-drop that combos with Overgrown Arch, putting early pressure on opponents.

Slotting nicely into either Witherbloom or Quandrix builds, Master Symmetrist is a solid defender against flyers who can also apply massive amounts of pressure during the attack stage.

Master Symmetrist synergizes with Fractal tokens, providing Trample to the Druid when it attacks. It also has Reach, defending against the many Flying creatures and tokens within STX while buying Quandrix builds time to ramp up. Master Symmetrist can also get splashed in a number of other archetypes as a solid four-drop with value.

Fetch a land and put it onto the battlefield immediately with Field Trip while also pulling a Lesson from outside the game.

Slotting ideally into the Quandrix ramp theme, Field Trip packs additional value via the Learn mechanic. Quandrix builds want to hit eight mana quickly, requiring ramp and stalling spells. Field Trip provides both and can even get splashed in other archetypes.

Ideal within a Witherbloom Lifegain build, Devouring Tendrils is a slightly worse version of Rabid Bite.

Should Devouring Endrils destroy the permanent it targets, it provides its controller with two life points, synergizing nicely with the Lifegain themes found in Witherbloom College. Outside of the Witherbloom archetype, it becomes slightly worse, in which players may want to pick up STX Mage Duel instead.