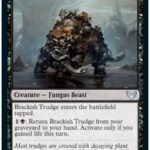 Mono-Black has the potential to have a major impact within the Strixhaven: School of Mages Limited format, providing Lifegain and life steal synergies in conjunction with Sacrifice and Counters.

Each college at Strixhaven University represents an archetype, with Witherbloom and Silverquill utilizing the Magic color Black. Witherbloom College (GB) has a Sacrifice theme in conjunction with tokens and Lifegain/steal. Silverquill College (WB) might become the most aggressive archetype, packed with low-cost creatures who synergize with Counters.

Several Mono-Black STX cards stand out, like Lash of Malice, a cheap removal spell that can splash into any archetype. Hunt for Specimens is another honorable mention, creating essential Pest tokens that synergize with Lifegain and Sacrifice themes. Leech Fanatic is a solid two-drop with Lifegain synergy while Arrogant Poet can slot find value within the right build.

From a Fungus Beast to a Vampire Warlock, here are the 10 best Black Common and Uncommon STX Limited cards.

Ideal in Witherbloom builds, Brackish Trudge synergizes with the Sacrifice and Lifegain themes. It also trades with an opponent’s most powerful early game creature.

Brackish Trudge also slots into the Aggro Silverquill builds, becoming a serious problem with Counters on it. White lacks Lifegain to return the Fungus Beast but having a couple of Counters on Brackish Trudge can quickly eat away at an opponent’s board state/life total.

Eyetwitch is an ideal one-drop in Black, synergizing with multiple archetypes while providing value via Learn.

Learn is a new STX mechanic, fetching Lesson cards from outside the game or providing Rummage. Cards like Star Pupil in White make Eyetwitch better and will delay opponents from attacking during the first few turns. Eyetwitch is also an ideal sacrifice outlet for Witherbloom. Players typically want to pick Lessons before Learn, but Eyetwitch might become an exception to that rule.

Synergizing with what Witherbloom decks want to accomplish, Necrotic Fumes is a solid three-drop removal spell that can provide additional value depending on what was sacrificed to cast it.

Flunk is a solid removal spell that can get used at any stage within a match.

Able to remove Aggro creatures during the early game and big creatures in the late game, Flunk is a cheap Instant removal spell that fits into any archetype utilizing the Magic color Black. It’s even splash-able in non-Black builds.

Mage Hunter is a four-drop creature with the potential to steamroll over spell-heavy decks.

A four-drop 3/4 without a Keyword isn’t much but a midgame chump blocker. Mage Hunter is unique, though, punishing opponents for casting Instant and Sorcery spells. Against a Prismari build, it’s an extremely detrimental card. Even against archetypes that will run six to seven spells, Mage Hunter should be able to shave a few Lifepoints off an opponent.

Unwilling Ingredient is a potential sleeper within STX Limited. Slotting into Silverquill and Witherbloom archetypes, the Frog has synergistic and attack value.

Counters in Silverquill turn Unwilling Ingredient into a powerful one-drop. Essence Infusion and Star Pupil provide early Counters onto Unwilling Ingredient that can become game-ending in conjunction with Tenured Inkcaster. The Frog is also a solid sacrifice outlet, that can return any number of times at the cost of three mana.

Umbral Juke is an upgraded Instant, offering players a choice between sacrifice removal or a Flash 2/1 token with Flying.

Players will most often utilize the second choice via Umbral Juke. The token can be an outlet for sacrifice, an evasive 2/1, or a Flash removal. Option one is nice to have but is too narrow against most builds.

Four-drop removal spells at Sorcery speed are a mid-pack pick at best. Mage Hunters’ Onslaught has the potential to become a top pick in an Aggro-style build.

Mage Hunters’ Onslaught is a solid finisher in Silverquill builds with a go-wide board state. It removes an imposing creature and opens the door for a number of one life pings upon the attack stage for lethal damage. Mage Hunters’ Onslaught likely won’t do much on turn four, leaving other four-drops available for a better curve.

Specter of the Fens

Specter of the Fens is also a finisher, utilizing its activated ability to hit an opponent for lethal damage.

Keeping Specter of the Fens alive is a challenge, with its weak 2/3 stat line. Play it smart and utilize its activated ability a couple of times and it’s likely game over for an opponent.

Similar to Specter of the Fens, Tenured Inkcaster’s stats are of minor importance. Utilizing Counter themes, the Warlock is a finisher within the Silverquill archetype.

Rather than relying upon an activated cost, Tenured Inkcaster utilizes creatures with Counters to steal life from your opponent during the attack stage while gaining its controller life. It also tops the curve nicely, putting opponents at a severe and quick disadvantage.