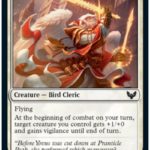 Mono-White will seemingly live up to its Limited format reputation of being less than stellar in Strixhaven: School of Mages with only a handful of Common and Uncommon cards worth first-picking in Draft.

Silverquill (BW) and Lorehold (RW), colleges at Strixhaven University, are two archetype themes within the new STX set that include White. The color Black leans heavily on life and death themes, along with Counters. Red has a graveyard theme, along with pump and burn spells. White contains a few Commons and Uncommons that synergize with these themes but most of the power cards are multicolor and not mono-colored.

Mono-White cards like Star Pupil deserve an honorable mention, synergizing with the Silverquill Counter theme, while Pilgrim of the Ages synergizes with the Lorehold graveyard shenanigans theme. Other honorable mentions include Defend the Campus, a narrow two choice pump or removal spell. And Expel is a solid removal spell that targets tapped creatures.

From professors and coaches to rescuers, here are the top Common and Uncommon White Draft picks for STX Limited.

Combat Professor is a four-drop 2/3 with Flying who, at the beginning of combat, pumps a target creature +1/+0 and gives it Vigilance until the end of turn. It’s also the best Mono-White Draft card within the STX set.

Professor of Symbology is a 2/1 two-drop that uses the new STX Learn mechanic upon entering the battlefield. The two professors are likely the only first-pick Draft cards within White.

Learn provides a player with two options—either put a Lesson from outside the game (sideboard) in their hand or rummage (discard a card to draw a card). Each Draft booster pack contains one Lesson spell, of which there’s a total of 20 within the STX set. And if fetching a Lesson isn’t an appropriate line, there’s always the option to rummage instead. Once it’s on the battlefield, Professor of Symbology is just a chump blocker.

Dueling Coach synergizes with Silverquill Counter shenanigans upon entering the battlefield while also containing an “on curve mana sink” that can place additional Counters on creatures who already have a Counter.

Dueling Coach is an odd creature card outside of a deck that uses Counters. Similar to a majority of White Common and Uncommon STX cards, it’s not necessarily a first pick in Draft. But when a player already has cards that synergize with it, it’s an Uncommon that’s worth grabbing.

Similar to Dueling Coach, Thunderous Orator isn’t a first pick, thriving only in Aggro/Midrange builds that use cards with keywords.

Black and Red STX Commons and Uncommons have a decent number of keyword cards with Lifegain, Menace, Haste, and Flying. Builds that don’t have a decent number of creatures with keywords won’t find much of a use for Thunderous Orator. But a turn-one play of Unwilling Ingredient, followed by Thunderous Orator on turn two, will put a good amount of pressure on an opponent during the early game.

Combat tricks like Beaming Defiance aren’t a top pick, often ending up in a player’s sideboard. Due to an abundance of spells and removal within STX, Beaming Defiance becomes a valuable two-drop worth picking up in an Aggro build.

Holding two mana is rough but worth it. The STX set is packed with target spells that can quickly disrupt a build. Beaming Defiance protects key cards with Hexproof while also pumping that creature’s attack/defensive stats. Beaming Defiance isn’t a first pick in Draft, but once a path toward Aggro has been chosen, it becomes an important one.

Synergizing well within the Lorehold archetype as a Spirit Cleric, Pillardrop Rescuer is an expensive 2/2 Flyer with an enter-the-battlefield Recover ability. It’s a top pick for Aggro builds but a hard pass when playing other archetypes.

Matches within the Limited format are often slower-paced than Standard Constructed, providing expensive casting cost cards like Pillardrop Rescuer space within a build. A five-drop 2/2 creature lacks value, which the Spirit Cleric makes up for by letting its controller return a three-mana or less creature to their hand. Recover prevents players from running out of gas while also giving them board state recovery or advantage.