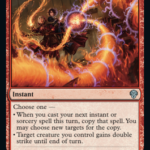 Red decks in Dominaria Limited have access to high-powered Creatures and wants to win the game through combat backed up by efficient damage-based removal spells.

Limited is largely won through combat and Red can use its suite of combat tricks to trade up with an opponent’s key cards. It’s a color that takes advantage of Dominaria United’s new mechanic Enlist. This ability is good for aggressive decks by buffing an attacker’s power.

While Red is able to dominate the game through combat, it also synergizes with spellslinger builds. Red and Blue lists want to use cheap Instant and Sorcery spells to control the game and trigger various abilities.

There are four archetypes that use Red in Dominaria United Limited.

Here are the best Red Common and Uncommon cards in Dominaria United Limited.

Red benefits from Enlist by turning already aggressive Creatures into more dangerous threats. Balduvian Berserker is a three-mana Uncommon with a modest 1/3 body. It will block well, but the real value comes from attacking with Enlist. When Balduvian Berserker dies, which will most likely happen during combat, it deals damage equal to its power to any target.

You can use Enlist to increase Balduvian Berserker’s power and force the opponent to block or possibly accept a trade. The extra damage can be done to help Balduvian berserker trade up or become a two-for-one. In niche circumstances, the extra damage can just end the game. Being able to hit any target is great flexibility.

Trample makes it impossible to just chump block. Either the opponent will use a removal spell on your Uncommon or they will trade multiple Creatures in combat to deal with it. The card gets worse when played later into the match, but it can still be a force on the battlefield if you cast a couple of spells afterward.

Flowstone Infusion is similar to Gift of Fangs from Innistrad: Crimson Vow. Most of the time this will be a one-mana removal spell. Like Shock, Flowstone Infusion will hit most early-game Creatures in the format.

There is added utility because Flowstone Infusion can be used as a combat trick. That shouldn’t be your primary use because there are better combat tricks in Red, but it’s an option. Look at this card as a removal spell and it’ll hold its own in Limited.

Red seems to be focused on versatile effects that scale with the game. Ghitu Amplifier is a nice early play coming down as a 1/2 Creature. Whenever you cast an Instant or Sorcery spell, Ghity Amplifier gets a solid +2/+0 buff until the end of turn.

This can comfortably attack with the threat of any spell you cast becoming a combat trick. It will definitely force the opponent to consider their options. The Kicker ability turns Ghitu Amplifier from a decent card to one of the best Red Commons.

For a Kicker cost of 2U, Ghitu Amplifier returns target Creature an opponent controls to its owner’s hand when it enters the battlefield. This Kicker ability is a source of late-game disruption.

Strong removal is Red’s calling card in Dominaria United Limited. Hurloon Battle Hymn is a three-mana Instant at Uncommon. It can hit a Creature or Planeswalker for four damage. That is more than enough to kill most Creatures in the format.

For a Kicker cost of W, Hurloon Battle Hymn will also gain you four life. Four mana to deal four and gain four is excellent and will likely stabilize the game in your favor.

Five damage for five mana has been a playable effect in the past few sets. At Sorcery speed, this won’t come down at the opponent’s end step or anything, but it will help deal with an opponent’s key Creature or Planeswalker.

This will be a great pickup in Limited that can deal with any late-game bomb. It does have a scry ability stapled onto the card which does provide some additional value. At the point in which Jaya’s Firenado is cast, you’ll want the ability to scry away extra lands and continue drawing spells.

If you’re looking for a quick way to pressure the opponent then Keldon Strike Team is the right card for you. A three-mana 3/1 is an aggressive body that’s built to trade in combat. If you need a turn-three play then it’ll work. When it enters the battlefield, Creatures you control gain haste, so this can immediately attack.

The Kicker ability on Keldon Strike Team is strong. For Kicker 1W, it will create two 1/1 White Soldier tokens. These tokens will gain haste. The tokens being Soldiers is relevant because they will benefit from any Soldier-tribal synergies you have. Paying five mana for three bodies is a nice deal that makes Keldon Strike Team a strong Red Common.

Twinferno is a versatile two-mana Instant that will almost never be a dead card in hand. This spell can double up on removal spells. At only two-mana this copy effect won’t be too hard to cast and combine with a Lightning Strike or Hurloon Battle Hymn. Look for combos to become known as the format ages.

Generally, spell copying effects in Limited aren’t great. The ability to turn Twinferno into a combat trick is what makes the card playable.