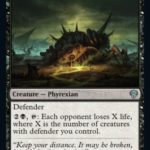 Black is a powerful and synergistic Magic: The Gathering color in Dominaria United Draft, from removal to creatures.

Scheduled to release digitally on Sept. 1 with tabletop prerelease events running from Sept. 2 to 8, Black is one of the better colors within the Dominaria United (DMU) Limited format. It synergizes well with White and Red regarding sacrifice themes and is a solid splash in any other colors for its removal. There are four main archetypes that Black works within Dominaria United Draft.

There is also a Defender archetype that likely contains three or more colors, with Black containing Glibbering Barricade—synergizing with sacrifice themes in WB and BR. Other honorable mentions include Bone Splinters, a solid one-drop removal within sacrifice-themed archetypes. 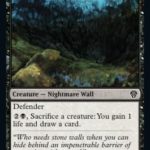 Battlefly Swarm is another solid one-drop, able to get in for early damage while using its activated Deathtouch ability to protect during the mid and late-game stages. Sengir Connoisseur is a solid late-game finisher that synergizes well with WB and BR

Sengir Connoisseur is a solid late-game finisher that synergizes well with WB and BR. Knight of Dusks Shadow is the sleeper Uncommon of the DMU Draft, slotting nicely into Aggro builds. And Shadow Prophecy is a solid Instant that will likely slot into UB Control decks.

Defender is a fun sub-archetype to put together but Blight Pile is more than a chump blocker. The Phyrexian creature can’t attack due to the Defender keyword. Its 3/3 stats are strong during the early game, though, especially for only two mana.

Blight Pile stands out from other Black cards within the DMU Draft meta due to its activated ability, synergizing with BR and WB sacrifice themes. Heading into the mid and late game stages, the Defender evolves into a sacrifice engine, draining the life from your opponent for a moderate cost of 2B mana.

Synergizing with sacrifice builds in WB and BR, Cult Conscript is a one-drop 2/1 that comes into play tapped. Despite not being able to attack upon entering the battlefield, it’s prime sacrificial fodder as it can return to the battlefield for 1B if a non-skeleton creature died that turn. And Cult Conscript is the only skeleton creature within the Black DMU Commons and Uncommons.

Sengir Connoisseur is one of the best top-end finishers in Black, while Writhing Necromass is both a solid top-end finisher and midgame creature when built into sacrifice BW and RB decks. It also slots in GB reanimation, giving the archetype legs in the DMU Draft meta.

Writhing Necromass is a seven-cost 5/5 that has its cost reduced for every creature card in your graveyard. The zombie giant doesn’t typically drop until turn six or seven still but won’t eat up all your mana upon entering the battlefield. Having Deathtouch is an added bonus, providing additional pressure upon attacking or when leaving up as a blocker.

Cut Down is a cheap removal costing only one Black mana that can remove any target creature with a total power of five or fewer. At Sorcery speed, this is a bad Uncommon. But it’s at Instant, providing multiple lines of play during a DMU Draft match.

Sagas in DMU introduce the Read Ahead mechanic, bumping the value of Braid’s Frightful Return up to top pick status when building a WB or RB sacrifice-themed deck.  The Black saga can disrupt an opponent’s strategy while providing card advantage to its controller. And Read Ahead opens up a good amount of flexible play lines for various stages of a match, despite the three mana cost to play Braid’s Frightful Return.

Splatter Goblin is filling in the two-drop spot in a variety of DMU Draft archetypes. The Phyrexian goblin is great during the early game stages, potentially taking out an opponent’s creature with three toughness. Players will play around Splatter Goblin, allowing the Phyrexian to chip away at life or trade with something of value that an opponent has during the early game. It’s also a solid sacrificial target when necessary.

Graveyard archetypes in previous MTG Limited have fallen short of being a top-tier meta build. Urborg Repossession may change that trend as a one-drop Sorcery speed spell with a Kicker of 1G. Returning two creatures to hand and gaining two life for a total mana cost of three is decent. Urborg Repossession also slots into sacrifice decks that may want to splash Green as a third color.

Extinguish the Light remembers Jaya, who sadly fell during the Phyrexian invasion of Dominaria. The Black Instant is prime removal, able to target a creature or planeswalker while also gaining three life. Four mana removal is great in the Limited format, even with double Black pips.

Rounding out the best DMU Draft cards in Black is Phyrexian Rager. Three-drops that provide card draw have proven strong in past MTG Limited formats. The Phyrexian horror has the downside of losing one life upon getting to draw a card on ETB but is easily replenished within the BW archetype.