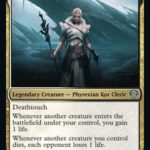 Flexibility and multiple synergies return to Magic: The Gathering Limited Draft through Dominaria United in the White and Black archetype.

The White and Black (WB) archetype in Dominaria United (DMU) Draft is one of the strongest two-color builds within the Limited format. Signpost cards for the archetype are Elas il-Kor, Sadistic Pilgrim, and Aron, Benalia’s Ruin. Of the two, Elas il-Kor is the gold Uncommon that should pull a player into the WB archetype.

Elas il-Kor, Sadistic Pilgrim combines everything WB wants to do in an MTG Limited format. The cleric synergizes with sacrifice themes through “drain and gain” abilities, has Deathtouch, and only costs two mana.  Aron, Benalia’s Ruin is more of a support card to Elas il-Kor while Cult Conscript is the bomb Uncommon players will want to pick first in a pack to work alongside the Phyrexian Kor cleric. And both will likely have an impact on the DMU Standard meta as well.

The WB archetype in DMU Draft is more than a sacrifice deck, thriving off token generation, Lifegain, and go-wide strategies. Providing tokens that can get used as sacrifice fodder, Enlist pumps, and go-wide boards are the White creatures Resolute Reinforcements and Argivian Cavalier. 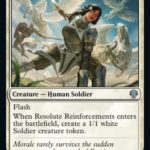 Captains Call is also a great token generator, especially when paired with Griffin Protector during the late game, potentially giving the griffin enough power to hit an opponent for lethal damage. And Sengir Connoisseur is the staple top-end DMU creature for the BW Draft archetype, scaling in power once per turn whenever one or more creatures died that turn.

Synergizing with both tokens as sacrificial fodder while having a strong early game presence is Benalish Sleeper, alongside the wall Gibbering Barricade. Splatter Goblin is a solid early-game two-drop that can get used as sacrificial fodder. A copy or two of Phyrexian Ranger can provide some much-needed card draw.

Kight of Dawn’s Light is a strong early game creature that synergizes with Elas il-Kor through Lifegain. And Toxic Abomination is a solid pick when there are multiple ways to gain life in your BW Draft deck. 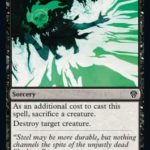 Both the MTG colors Black and White contain good removal and combat tricks as well. In the color Black, Bone Splinters is great when tokens or Cult Conscript are on the battlefield. Cut Down is a solid removal spell since it only costs one mana, typically alleviating early threats. Extinguish the Light is fine, but you only need one copy at most.

Artillery Blast is a solid two-cost Instant that is essentially Shock for White but scales in damage output when other colors are splashed into your build through the Domain mechanic. Citizen’s Arrest is really good in BW, potentially a better choice than Extinguish the Light. And Take Up the Shield is the best Common combat trick in White, protecting a creature while granting it a +1/+1 counter as well.

Players can test out the WB archetype through MTG Arena Limited Draft with the digital launch of Dominaria United on Sept. 1. Prerelease events will run from Sept. 2 to 8. And the full global launch is slated to take place on Sept. 9.