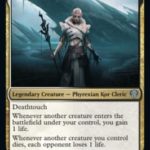 A return to the plane of Dominaria has sparked a total of 10 staple archetypes for Dominaria United Limited Draft and Sealed.

Gameplay in Limited Draft and Sealed for Dominaria United (DMU) begins with a digital launch on Sept. 1. Prerelease events at local WPN game stores will kick off that weekend and run from Sept. 2 to 8. And the global launch for DMU is scheduled to take place on Sept. 9. There are a total of 10 staple archetypes within Dominaria United Draft, featuring three different signpost cards for each color pair.

Here are the themes for each color pair in DMU Limited Draft and Sealed, according to principle game designer Gavin Verhey.

There is also an eleventh secret archetype, according to Verhey, called Defenders in White and Blue. Within the DMU set, there are a total of nine cards that have the keyword Defender. 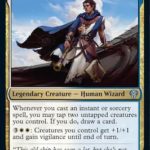 Raff, Weatherlight Stalwary is a mediocre early-game creature that can chump block aggressive attacks while having a lot more value during the late game through token creation and card advantage. Tura fits the WU go-wide strategy slightly better than Raff, as long as there are enough Instant and Sorcery spells in the deck. 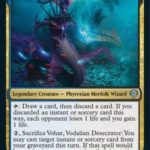 Drain and gain strategies with a splash of reanimation shenanigans return to DMU Draft in the color Blue and Black. Both Uncommon signposts seem solid in the archetype.

Blue and Red (UR) 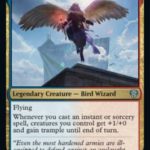 Balmor, Battlemage Captain is a strong spells-matters signpost for only two mana. And Najal, the Storm Runner is a very strong creature in the Limited format, allowing its controller to cast Sorcery spells as if it had Flash. 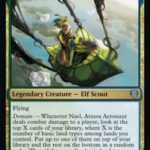 Players won’t likely want Nael, Avizoa Aeronaut in two-color Limited builds, outside of being a 2/4 Flying creature at a cost of four mana. But Tatyova, Steward of Tides is a solid UG creature worth grabbing. 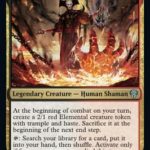 Black and Red decks thrive off sacrificing creatures and Garna, Bloodfist of Keld is a good mid-game creature to capitalize on creatures dying. Lagomos, on the other hand, can synergize with Garna but their second ability won’t likely come into play. 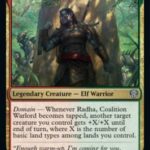 The Red and Green deck has the potential to become a strong archetype in the DMU Draft format, using Domain in conjunction with well-stated creatures. Radha, Coalition Warlord is a solid creature who can pump an ally for at least +2/+2. And Rulik Mons, Warren Cheif ramps through attacking with Menace while also creating tokens if a land wasn’t on the top of the library. 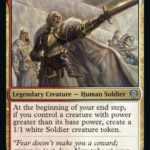 Red and White is an aggressive archetype with Baird providing bonuses when a creature’s power is greater through a pump or combat trick that turn. And Tori D’Avenant not only synergizes with Baird but provides powerful keywords like Trample and Vigilance. 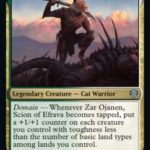 Queen Allenal of Ruadach won’t likely grow beyond a 2/2 but her second ability has potential. And Zar Ojanen is good for pumping the power and toughness of tokens that are 1/1 but won’t accomplish much else in a two-color GW deck.

The Black and White archetype looks strong in DMU Draft, with Elas bringing drain and gain in conjunction with Deathtouch on a cheap body. And Aron is a solid three-drop 3/3 with Menace that taps into sacrifice themes. 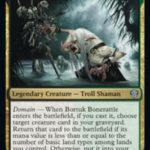 Three-color Limited decks can take advantage of Bortuk, although the six mana casting cost is quite high. And Uurg is a good three-drop for graveyard shenanigan builds, able to hang around on the battlefield with a toughness of five.