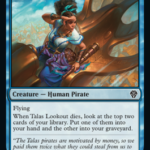 Blue decks are usually tricky to play in Limited because of the color’s reliance on “feel,” whether it involves knowing when to apply pressure or which cards demand an answer.

Sometimes Blue can be a horrible color like it was in Adventures in the Forgotten Realms, often getting run over by colors with significantly better Commons and Uncommons. For other sets, like Innistrad: Midnight Hunt, Blue can be a top-tier color. Much of Blue’s success relies on lower-rarity pieces and how they affect the battlefield.

Here are the best Blue Common and Uncommon cards for Dominaria United Limited.

In Limited, good cards are generally playable at different portions of the game. Battlewing Mystic is a good card to play early and late. This flying Wizard can come down on turn two and start attacking. It fits well into the U/W Flying archetype and fits into any Wizard-specific buffs that come up.

The R kicker ability should be decent. If it was kicked, you discard your hand and then draw two cards. In a spells deck, you’ll be playing multiple cards in a turn to empower various payoffs. Battlewing Mystic is a great top deck in the late game. If you’re down to a few cards in hand, Battlewing Mystic can come down and draw you two cards.

Combat Research should fit nicely into the U/W Flying deck. It lets your evasive attackers become a semi-consistent source of card draw. If this engine can get going on turn two or three, it can help snowball the game in your favor.

It does have some upside by giving a legendary Creature +1/+1 and Ward 1 too. This does seem to get worse as the game goes on and the opponent potentially finds a way to block in the air. The ability will be more relevant than past sets because every pack in Dominaria United Limited will contain a legendary Creature.

Soaring Drake isn’t great, but it will be a key part of the U/W Flying archetype in Limited. It won’t dominate the battlefield. A three-mana 2/3 Creature can block most early-game plays by the opponent. It will need to be dealt with at some point as an attacker, especially if it receives counters and buffs from other cards.

Look for Soaring Drake to be a key Common building block in U/W Flying.

Djinn of the Fountain

Blue decks can’t always rely on their bomb Rare or Mythic Rare to get the job done. This is where lower rarity threats come into play. Djinn of the Fountain is a six-mana 4/4 flying Creatue that gets better whenever you cast an Instant or Sorcery.

This card effectively has Prowess, letting you give it +1/+1 until the end of turn whenever you cast an Instant or Sorcery. The other two abilities are solid too. It protects itself by exiling then returning at the next end step. The trigger also allows you to just scry one, a fine way to smooth out draws and continue drawing spells.

Djinn of the Fountain will fit into a spellslinger list or at the top end of a U/W Flying build.

This is Frost Titan for Magic zoomers. This five-mana 4/4 Giant comes with built in protection with Ward 2. When it enters the battlefield, it taps down a Creature and puts a stun counter on it. Frostfist Strider is a large Creature that can tap down a blocker, leading the way for you to swing in for big damage.

This isn’t as good as Frost Titan because a 6/6 is such a dominant body even if it costs one mana extra. With that said, this is still an excellent uncommon. It can fit into any Blue deck because of its genetically good abilities.

Sorcery speed aside, Impede Momentum is a strong card that is cheap enough to be playable. For two mana you tap a Creature and put three stun counters on it. That will keep that Creature out of combat for four turns. It also comes tacked on with a scry one ability.

This probably isn’t an excellent turn-two play. You’ll want to save this for a key Enlist threat when facing a White deck or any color’s big four or five-mana bomb. Three stun counters is significant and this card might be better if you have multiple copies in the list. Don’t overdo it with drafting copies of Impede Momentum because it’s still a Sorcery.

Impulse is a glue card for Blue decks in Dominaria United Limited. Impulse is a two-mana Instant at Common. It lets you look four cards deep, put one into your hand and the rest on the bottom of your library in any order.

This will most likely find you exactly what you need. Impulse is great in the early game if you need to guarantee land drops or late if you need to find a finisher. Just play Impulse, it won’t be a bad card.

The solid body will likely trade favorably in combat and if it doesn’t, it will be an evasive attacker. When it dies, it draws you a card. In decks that are able to get spells out of the graveyard, Talas Lookout is even better.

This five-mana Kicker play can swing the late game in your favor. At the point Phyrexian Espionage is kicked, the opponent will likely be low on cards. Forcing them to discard a card will put a lot of pressure on their resources.