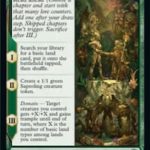 Green is a unique Magic: The Gathering color in Dominaria United Draft, synergizing with multicolor builds of three or more through Domain while also containing solid combat tricks.

Kicker and Domain are the two main Dominaria United mechanics that will shine on Green MTG cards in the Limited format. Unlike the other colors, many of the Green cards were designed to perform better within builds that are playing three or more colors. The mechanic Domain is used to pump stats based on the number of basic land types in play while Kicker costs on Green spells feature a different color.

There are a total of 10 staple archetypes within the DMU Limited format. An eleventh archetype focuses on Defender cards as a shell, which requires three or more colors. Additional archetypes also exist, ranging from tricolor to five-color builds.

Here are the staple two-color DMU Draft archetypes for the color Green.

Honorable mentions in Green include Elvish Hydromancer, a three-drop 3/2 that can create a copy of a target creature you control upon getting Kicked at a cost of 3U. Floriferous Vinewall is a cute two-drop Defender that can ramp by fetching land (including dual color DMU Common lands) to hand upon entering the battlefield. 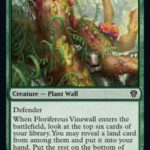 Colossal Growth showcases the power of Kicker, becoming a combat trick that’s essentially a finisher at the cost of three mana (1GR). And Magnigoth Sentry is a solid four-drop 4/4 with Reach.

From combat tricks to creatures packed with value, here are the best Common and Uncommon rarity Green Draft cards in Dominaria United Limited.

Sagas play a minor role in the DMU Limited format, but The Weatherseed Treaty has proven its worth, especially through the new Read Ahead mechanic. The Green Enchantment does everything the color wants to do, from fetching a basic land for Domain synergies and ramp to pumping the power of a target creature using the Domain mechanic. It also produces a token from chapter two, providing a creature if necessary or as sacrifice fodder when splashed into BW or BR builds.

Linebreaker Baloth is a solid five-drop top-end big stompy creature. It’s also one of the few DMU cards that can use the new Enlist mechanic effectively within the Limited format. Opponents can’t block the beast with tokens while tossing a combat trick like Colossal Growth on Linebreaker Baloth can give it Trample for that lethal push of damage.

The Red/Green archetype in Dominaria United is packed with solid Aggro cards, with Yavimaya Iconoclast being one of the best. A 3/2 two-drop is a solid card on its own. The elf also has a Kicker of one Red mana, that pumps Yavimaya Iconoclast stats and gives it Haste until the end of the turn. In addition to also having Trample, the elf will have a major impact during the early game when played on curve.

Similar to Yavimaya Iconoclast, Nishoba Brawler is a powerful two-drop. The cat warrior has Trample and toughness of three but can scale in power through the Domain mechanic. In builds that are playing three or more colors, Nishoba Brawler is a top-pick Uncommon. And in a dual-color deck, the cat is still strong, leaving players room for flexibility when picking the cat during the first pack.

Fight spells return in DMU with Tail Swipe, a one-drop Instant speed Green spell. Having the fight spell at Instant speed is nice and players have an added benefit applied upon casting it during the main phase instead. Given the size of some of the creatures in Green, Tail Swipe is removal worth grabbing as an early pick.

Using the Domain mechanic to its advantage, Territorial Maro is a good example of what top-end cards will look like in builds that run more than two colors. The Domain archetype quickly took off following the digital launch of DMU, with Maro being a staple midgame creature within the build.

Most Domain decks run five color types while focusing on three colors, with Green always being one of the main MTG colors in the build.

By turn five, it’s easy to have three to four color types on the battlefield thanks to the dual color lands in Dominaria United, making Territorial Maro an 8/8.

Strength of the Coalition

Strength of the Coalition is a solid Green combat trick that has the added bonus of becoming an anthem upon paying the Kicker cost. Slotting into WG go-wide decks, the Kicker of 2W puts a +1/+1 counter on each creature you control as opposed to targeting just one creature with a +2/+2 counter. It’s a flexible combat trick at Instant speed that will work in a variety of archetypes.

Likely one of the best Commons in Green, Bog Badger is a three-drop 3/3. By itself, it’s a bear. But with the Kicker of one Black mana paid upon casting, it becomes a 3/3 to hang behind on defense while the rest of your creatures gain Menace until the end of the turn. Menace isn’t as good as Trample or Flying, but it can shift the advantage of a game in your favor quickly. And having multiple copies of Bog Badger can easily end games.

Big stompy Green creatures want to be Mossbeard Ancient, a seven-drop 7/7 with Trample. The treefolk is great in the UG ramp archetype and a solid finisher in any build using Green as one of the main colors. Combat tricks work well with Mossbeard Ancient to finish off games and the treefolk provides five life upon ETB, stabilizing a late-game board state if necessary.