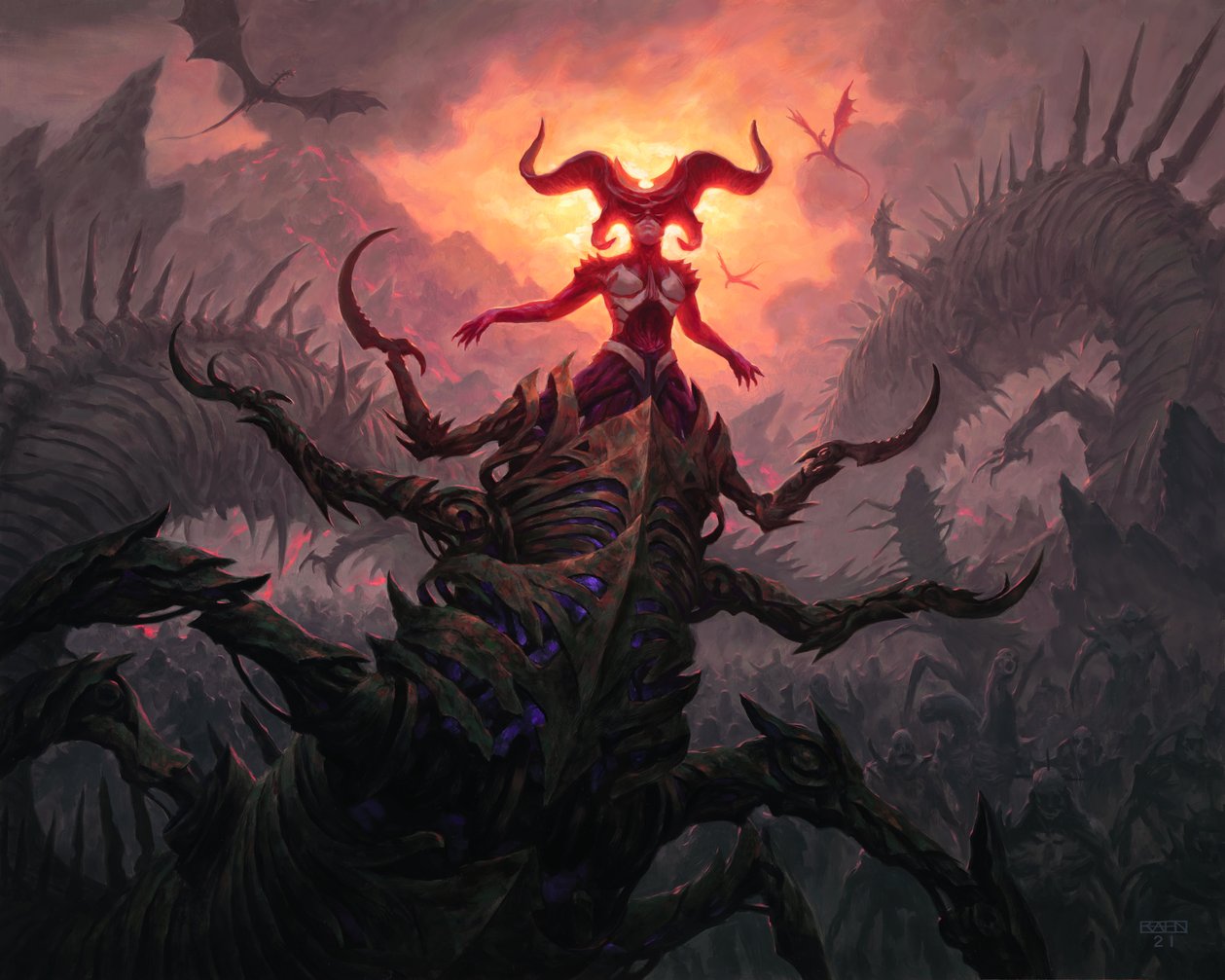 Dominaira United was the catalyst for a fall set rotation which completely shifted the metagame of the format into one centered around Black decks.

The top archetypes in Standard are built around powerful Black spells and efficient removal found in the colors. Unlike other strategies, Black lists didn’t lose much with rotation. They seamlessly shifted with new additions like Evolved Sleeper and Liliana of the Veil.

Black decks take different forms. Rakdos Midrange is a grindy, value-based build. Mono-Black Midrange has the ability to blitz the opponent while having an effective long-term strategy. Orzhov, Jund, and Grixis lists build on a similar core with different support pieces.

Magic Arena is holding its first major event for post-rotation Standard with the Standard Metagame Challenge which begins on Sept. 9. This best-of-three event calls players to bring their best decks to compete for in-game prizes. For an entry fee of 2000 gold or 400 gems, players play until they reach seven wins or lose once. Seven wins awards players with 30 Dominaira United packs and 5000 gold.

Here are four strong decks to play in the Standard Metagame Challenge on Magic Arena.

Rakdos Midrange has established itself as one of the best decks before rotation, and its status is further solidified after rotation. The strategy relies on seemingly endless value to outlast opponents regardless of match-up.

The core of the strategy relies on efficient spells that generate value, so even if they are immediately removed you still come out on top of the trade. Fable of the Mirror-Breaker is an all-star card found in every Rakdos Midrange build.

Fable of the Mirror-Breaker strains the opponent’s resources, often taking two removal spells to fully deal with it. The second chapter of the saga lets you ditch the weakest two cards to dig deeper into the deck, an ability that is as good on turn three as it is on turn 10.

Dominaria United introduced a handful of new cards that fit well into Rakdos Midrange’s strong shell. Sheoldred, the Apocalypse demands an answer, or it will run away with the game by punishing the opponent for simply drawing cards. Evolved Sleeper is also an excellent one-drop Creature that scales with the game.

A challenge going into the Standard Metagame Challenge is the possibility of mirror matches. This will likely be the most popular strategy, so packing the sideboard with targeted hate will be important.

Invoke Despair is the centerpiece of the Mono-Black Midrange archetype. This five-mana spell is an effective finisher that can also deal with an opponent’s problematic permanents.

Supported by an aggressive curve highlighted by Evolved Sleeper, Tenacious Underdog, and Graveyard Trespasser, Mono-Black Midrange is able to quickly dish out damage, paving the way for Invoke Despair to decimate the opponent.

Liliana of the Veil fits nicely into the three-mana slot, punishing slow Creature decks and forcing control decks to deal with her among the litany of other threats on your battlefield by turn three. This deck has the potential for explosive, quick wins that Rakdos Midrange isn’t necessarily capable of as often. This gives it a slight edge in the matchup.

Mono-Black Midrange lacks some of the card-draw found in Rakdos Midrange, so it may struggle in drawn-out games. However, it does have some tools for these matchups in Sorin the Mirthless and Reckoner Bankbuster.

Players have been experimenting with a Jund shell centered around reanimating bombs like Titan of Industry and Workshop Warchief. Crokeyz piloted an inventive twist on the Jund Midrange archetype using Golden Argosy to overwhelm the opponent by repeating powerful enter-the-battlefield abilities.

The core of the deck looks to use mill effects like Teachings of the Kirin and the second chapter of Fable of the Mirror-Breaker to stock the graveyard with powerful Creature cards. By using the third chapter on The Cruelty of Gix, a Creature from the graveyard can be put onto the battlefield. This can get out Titan of Industry two turns early

Jund Midrange turns on after turn three, and allows the strategy to go over the top of the other Black-based strategies in the format. Other lists aren’t equipped to effectively deal with a resolved Titan of Industry or Soul of Windgrace. The ability to repeatedly reanimate these Creatures hurts the one-for-one removal found in Mono-Black and Rakdos.

The spice in this list comes from the one copy of Golden Argosy, a four-mana vehicle that blinks every Creature that crewed it. This acts as a great finisher and value engine that can repeatedly blink your Creatures to drown the opponent in the late game.

Toward the end of the previous Standard format, U/W Tempo was emerging as an effective decklist that needed a few extra tools to turn the corner and become more respected. Dominaria United gave the archetype two excellent cards. Combat Research helps the deck draw cards to find more protection spells, and Shore Up is an excellent protection spell that also untaps and puts a +1/+1 Counter on a Creature.

Since this is a Creature-based deck, The Meathook Massacre and Liliana of the Veil are major concerns. This is where Slip Out The Back is effective. Phasing a Creature out gets around -X/-X and sacrifice removal. A solid metagame read would be to add in copies of March of Swirling Mists to tech against the many Black decks in the format.

There are similar tempo decks in the format like Mono-Blue Delver, but U/W Tempo has the edge over it because it can play Illuminator Virtuoso. This uncommon is one of the most explosive cards in the list. U/W Phasing also does a better job at dodging a resolved Temporary Lockdown than Mono-Blue Delver.

Related: How to play U/W Phasing in Magic: The Gathering Standard

The strategy hinges on playing a Creature early and protecting it. Illuminator Virtuoso is the best Creature in the deck. It grows quickly, and double strike means it can end games within two or three turns. Ledger Shredder and Stormchaser Drake are solid sources of card draw and can finish the game with a full-on air attack.

The sideboard is packed with counterspells and graveyard hate to combat Black-based strategies.