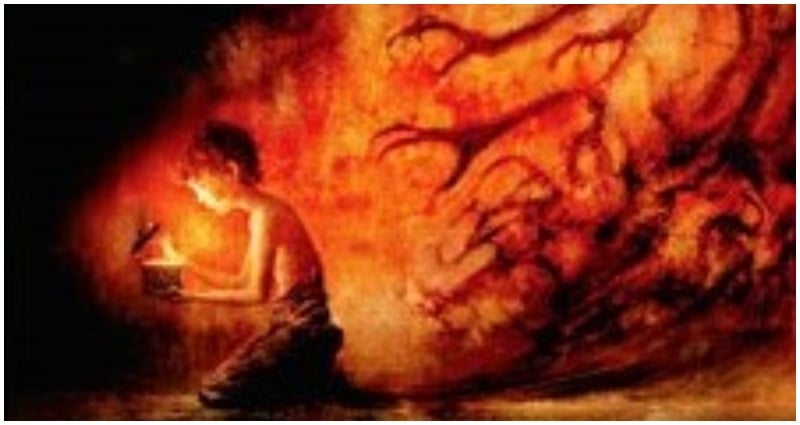 The Theros: Beyond Death spoilers continue with a risky Rakdos five drop, Allure of the Unknown.

Another Rare from the Theros: Beyond Death (THB) set was revealed today, showcasing stunning artwork from Seb McKinnon. The Allure of the Unknown has a CMC of five, one Black and one Red, providing decent card draw with a risk.

“Reveal the top six cards of your library,” the card reads. “An opponent exiles a nonland card from among them, then you put the rest into your hand. That opponent may cast the exiled card without paying its mana cost.”

For Aggro decks like Burn or Rakdos Knights, Allure of the Unknown has the potential to refill a hand while an opponent acquires a card that may not benefit them. It’s a gamble. But when facing a Midrange or Control deck that just wiped the board and a controller’s hand is nearly empty, it could swing the tempo back in a player’s favor.

Allure of the Unknown might not see a ton of action in Standard Constructed and Limited, but some Magic players seem willing to give it a shot.

“Absolutely, in a Rakdos or Mardu aggro deck,” a Reddit user said. “Best case scenario for your opponent is that they get a dork or a burn spell, while you get to refill your hand. Those decks aren’t going to play more than two, but this could definitely work in decks with very low curves.”

The Rare THB sorcery will also likely appeal to Commander players. But it’s unknown if it’ll see play in other Magic formats, like Pioneer.

Theros: Beyond Death is set to release digitally on Jan. 16 and officially launch on Jan. 24.