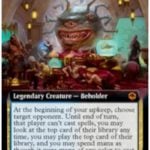 Over 40 Dungeons & Dragons: Adventures into the Forgotten Realms spoilers were released today, hitting the mark on flavor while also showcasing playable cards in multiple Magic: The Gathering formats.

Scheduled to release globally on July 23, the first Dungeons & Dragons: Adventures into the Forgotten Realms (AFR) spoilers revealed a number of solid cards in Limited, Commander, and Standard formats. One of the most flavorful cards of the day was Treasure Chest, a three-cost Artifact using the roll of a d20. A cycle of reaction modal Instant spells was revealed and the MTG keyword Pack Tactics introduced a possible turn-two lethal attack.

Here are the best AFR spoilers from June 29.

Xanathar, Guild Kingpin is a UB six-cost that was likely designed for the MTG Commander format. The monster’s stats are 5/6, but its true power comes from its passive ability. At the start of its controller’s upkeep, you choose a target opponent. Until the end of turn, that player can’t cast spells and you can play any top card from their library at any time.

The artwork for Icingdeath, Frost Tyrant was previewed last week during the AFR spoiler launch and its card was worth the wait. Equipped with keywords like Flying and Vigilance, the 4/3 dragon creates an Equipment Artifact token upon dying. To equip the Equipment Artifact, it will cost two, pumping the creature it’s attached to by +2/+0.

Grazilaxx, Illithid Scholar is a Legendary Horror that can return a creature you control back to its owner’s hand when that creature becomes blocked. The three-drop 3/2 Horror can also draw a card whenever one or more creatures you control deal combat damage to a player.

The Book of Vile Darkness

Artifact decks in multiple MTG formats got a boost today from The Book of Vile Darkness. It’s a Mono-Black three-drop a solid passive ability that can combo with Eye of Vecna and Hand of Vecna to create an 8/8 Zombie God token with Indestructible that gains all triggered abilities from exiled cards.

Hive of the Eye Tyrant

Creature lands return with Hive of the Eye Tyrant. Able to enter the battlefield untapped before its controller has two or more other lands in play, the land has a paid ability that turns it into a 3/3 Black Beholder with Menace. Hall of the Stone Giant was also revealed, creating the possiblility for a cycle of creature lands in AFR.

Dissolve is a paid ability that pulls a creature exiled by Gelatinous Cube equal to “X” mana paid into its owners graveyard.

The official global tabletop release of AFR will take place on July 23. A digital launch via MTG Arena and Magic Online is scheduled to occur on July 8.