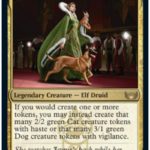 A cycle of five hybrid legendary creatures will be released with the Streets of New Capenna set, impacting multiple Magic: The Gathering formats.

The Streets of New Capenna (SNC) showcases five crime families, represented via three Magic colors, sometimes referred to as Shards from the Alara block. Each of the five families has a representative legendary creature as the crime lord boss, along with henchmen and Limited signpost creatures at a rarity of Rare and Uncommon. In addition to all these other cycles, SNC features a cycle of hybrid legendary creatures.

The five hybrid SNC legendary creatures are extremely versatile in that these MTG cards can slot into up to four different shell archetypes. Jinnie Fay, Jetmir’s Second, for example, can be played in Mono-Green, WG Selesnya, RG Gruul, or in three-color Naya builds. The Monocolor mana within each hybrid cost is the main MTG color for that legendary creature, supported by the two ally colors.

Each of the hybrid legendary creatures in the cycle supports the SNC Limited archetype for those three colors while also offering additional value that can be used in other Magic formats. All five have a rarity of Rare and the mana costs can range from three to five.

Here are the five New Capenna hybrid legendary creatures and how they work.

There’s an abundance of tokens within MTG, some being creatures while others like Treasure and Blood tokens are Artifacts. Jinnie Fay, Jetmir’s Second can turn any token, not just creature tokens, into either a 2/2 Green cat with Haste or a 3/1 Green dog with Vigilance.

Within the SNC Limited format, there are a total of 38 cards that produce tokens in either White, Red, or Green—or a combination of those colors, including Jinnie Fay, Jetmir’s Second. In the Standard format, there are cards like Adeline, Resplendent Cathar that produce a token upon attacking, along with Esika’s Chariot that copies tokens. And Sedgemore Witch creates a token every time you cast or copy an Instant/Sorcery spell if you splash in the MTG color Black.

Of the five hybrid legendaries within the SNC cycle, Jinnie Fay, Jetmir’s Second is likely the one that will see the most gameplay within multiple Magic formats.

Synergizing with Aggro, sacrifice builds, and Treasure tokens, Ognis, the Dragon’s Lash produces a Treasure token that is tapped every time a creature you control with Haste attacks. Aggressive decks want creatures with the MTG keyword Haste and are often filled with low-cost creatures. Creating Treasure tokens provides Aggro decks with versatility, via either more creatures cast per turn, casting a large top-end finisher, or having additional mana to cast a removal spell on your opponent’s turn.

The downside to Aggro decks that use Ognis, the Dragon’s Lash’s Treasure-making ability is that the tokens come in tapped and can’t be used until the next turn. But Jinnie Fay, Jetmir’s Second can turn those tokens into creatures right away. Magda, Brazen Outlaw can use those Treasure tokens to find a dragon. And Kalain, Reclusive Painter can use them on your next turn to add a +1/+1 counter onto your creature when cast via that Treasure token.

Of the five SNC hybrid legendaries, Evelyn, the Covetous has the most expensive casting cost. The vampire rogue also has narrow synergies, wanting to get played primarily within vampire tribal decks.

The vampire rogue synergizes with vampires like Anje, Maid of Dishonor via Blood tokens. Champion of Dusk is a solid vampire to add into Commander builds with Evelyn, along with Cordial Vampire and Captivating Vampire. If you’re building around Evelyn in a vampire tribal deck, having a large number of low-cost vampires allows you to cast the exiled card and another card from hand while potentially still having mana left up for removal on your opponent’s turn.

Toluz, Clever Conductor has the SNC mechanic Connive built into it, synergizing with Esper Limited decks. When a card connives, the player loots, drawing one and then discarding one. If the discarded card is a nonland permanent, the creature with Connive gets a +1/+1 counter.

Connive isn’t a build-around mechanic. It’s more of a support mechanic that provides card advantage via looting. But Toluz, Clever Conductor turns Connive into a build-around in that the discarded cards are exiled and upon the human rogue dying, the exiled cards return to their controller’s hand.

Toluz, Clever Conductor synergizes with cards that have the MTG mechanic Cycling, one of the main mechanics featured within Ikoria: Lair of Behemoths. The human rogue also synergizes with the Channel mechanic and any type of MTG deck that loots for card advantage via cards like Village Rites. Similar to Jinnie Fay, Jetmir’s Second, Toluz, Clever Conductor will likely see gameplay within a variety of Magic formats.

Rigo, Streetwise Mentor wants players to attack with creatures that have a power of one or less, drawing a card when they do. The cat citizen enters the battlefield with a Shield Counter for protection. Rigo, Streetwise Mentor can still get taken out, though, via removal spells that apply -X/-X to a creature or that exile.