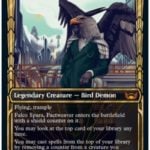 The Magic: The Gathering city of New Capenna will be run by five demon crime families within the Streets of New Capenna set, each containing a legendary creature as the patriarch.

The five families that run the city of New Capenna are the focus of the Streets of New Capenna (SNC) set, with each having its own unique mechanic and three-color mana identity. Of the three colors associated with each of the five families, the middle color showcases the narrative and mechanical identity, according to WotC. And each family contains a legendary creature that is the patriarch.

The five demon lord crime families are the Brokers, Cabaretti, Riveteers, Maestros, and the Obscura.

White is the main color within the Brokers family, thematically providing protection and control in conjunction with the MTG colors Green and Blue. Falco Sapra, Pactweaver is a bird demon that has the SNC mechanic Shield Counter, a Brokers mechanic within the set.

Many within the Riveteers family are dragons, synergizing with Aggro and sacrifice themes. Red is the main color, working in conjunction with the MTG colors Black and Green.