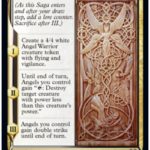 Sagas are in abundance with the release of Kaldheim in Magic: The Gathering—and many of them are having an impact across multiple formats.

Enchantment sagas slot nicely into most Control builds and are difficult to remove once they’re on the battlefield. The release of Kaldheim (KHM) has added a total of 20 sagas, 10 Rare and 10 Uncommon. Standard’s meta is still fresh with room for plenty of builds to take off, but a number of Commander decks are already scooping up multiple sagas.

From death angels to elves getting pumped, here are the five best KHM saga enchantments.

Angel tribal might not be a thing yet in the Standard format, but Firaja’s Retribution was still able to find a home in Standard via Esper Doom Foretold. The angel saga also slots nicely into a number of Commander decks, like Liesa, Shroud of Dusk, Firja, Judge of Valor, and Kaalia of the Vast. Firja’s Retribution’s ability to pump out a 4/4 angel of death is a solid addition to any BW Control deck in multiple Magic formats.

Showdown of the Skalds slots into RW Limited builds and may even find a home in Mono-Red Aggro in the Standard format. Slapping +1/+1 counters on cheap creatures during the mid game provides value and being able to cast off the top of the library can help an Aggro build gain advantage in the late game following a board sweep. Showdown of the Skalds has also seen some gameplay in Yorion Piles in Standard, along with a number of Commander builds.

The Raven’s Warning slots right into Control builds within Standard since it’s able to create tokens, gain life, cantrip, and pull a card from outside the game. Upon the release of KHM, the saga has found a home in Esper Doom Foretold. The Raven’s Warning is also getting played in UW Limited builds, along with Vega, the Watcher, and Kangee, Sky Warden EDH decks.

The Bloodsky Massacre is a powerful saga within BR Limited and tribal Berserker Standard builds. It’s also a great fit in a Valki, God of Lies Brawl deck. Several Commander builds, such as Kardur, Doomscourge, Rakdos, Lord of Riots, and Chainer, Nightmare Adept, are using The Bloodsky Massacre too. Extra mana never hurts and a Berserker with menace can deal easy damage or clear an opponent’s low-powered blockers.

Elven tribal gained a new saga with Harald Unites the Elves. Viable in multiple Magic formats, Harald fuels graveyard shenanigans while pumping elves on the battlefield. The saga is strong in BG elves in Limited, despite not finding a home in Standard at the time of release. Commander decks like Abomination of Llanowar are using Harald, though, and he’s even got his own Brawl build.