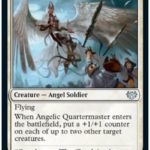 The color White maintains its value within the Limited format via Innistrad: Crimson Vow, showcasing solid early drops, late-game finishers, and cards with double the value.

Cards that are in the color White can slot into a number of different archetypes. Within Innistrad: Crimson Vow (VOW), the archetypes that include the color White are Blue/White spirits, Green/White humans, White/Black Lifegain, and Red/White creature beatdown.

Arm the Cathars is an ideal Uncommon that can slot into all four archetypes but has a downside of needing targets to truly be worth a top pick in VOW Draft. Resistance Squad is a solid card that primarily synergizes with GW humans but can end up as a dead card in hand if you don’t have any humans on the battlefield. And Distracting Geist is synergistic with UW spirits but clunky in any of the other archetypes.

The color White also received two decent Common and Uncommon removal cards via Valorous Stance and Fierce Retribution. Valorous Stance is a modal Instant that can provide Indestructible to one of your creatures or destroy a target with toughness four or greater. And Fierce Retribution is a solid two-drop removal spell on an attacking creature that can also take out any creature with Cleave, a new mechanic in VOW.

From spirits to angels, here are the 10 best Common and Uncommon cards for VOW Limited formats.

The new Training mechanic in VOW works really well on a Flying creature, like Gryffwing Cavalry. Able to slot into any of the four archetypes, the human knight will gain stats on the turn it attacks, and has a solid mana sink that gives your larger stated creature evasiveness until the end of the turn.

Estwald Sheidbasher is a four-drop creature that trains up your other creatures with the Training mechanic. Paying one mana makes the human soldier Indestructible while attacking, ensuring creatures with lower power stats gain that Training bonus. Estwald Shieldbasher is also a solid finisher that synergizes with the Enchantment Aura’s within UW spirits. 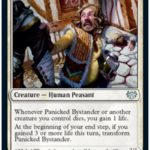 Supporting the BW Lifegain archetype, Panicked Bystander//Cackling Culprit is a solid two-drop that becomes a great card, if you can gain a minimum of three life during your turn to flip it. Since it also provides Lifegain upon a creature dying, it can also slot into the other archetypes as well, but as a lower pick in Draft. 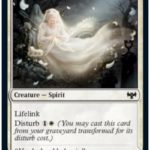 Lifegain is a powerful mechanic within Limited that can provide a massive amount of value when racing against an opponent. Kindly Ancestor//Ancestor’s Embrace synergizes with BW Lifegain and UW spirits. The spirit can also slot into RW as a Lifegain source but loses value in GW humans. 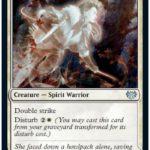 Double Strike is another powerful mechanic in Limited, found on the Uncommon Twinblade Geist. As a 1/1, the spirit warrior synergizes with the Training mechanic and fits into UW spirit decks as well. And should it die, a Disturb cost of only 2W gives another creature you control Double Strike via its Aura backside. 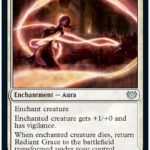 The front side of Radiant Grace is a sideboard card at best. But the backside adds enough value to make this Enchantment a top pick in Draft. Opponents will avoid killing the creature Radiant Grace is on because they don’t want it to flip. And once it does flip, it slows down your opponent unless they have some form of Enchantment removal. 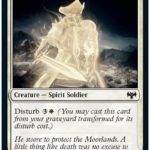 Likely the best two-drop in White, Drogskol Infantry synergizes best with UW spirits. But it works in the other archetypes as well, providing an Aura Enchantment that you can cast for value later in the game at no cost of taking up a slot when constructing your deck.

Parish-Blade Trainee may also be the best VOW two-drop in White, synergizing with the Training mechanic while giving value to another creature via counters when it dies. The human soldier will likely acquire at least two +1/+1 counters via Training before getting taken out, which can get used to increase a lower-powered creature’s stats or enable a large creature to train up the smaller ones.

Angelic Quartermaster is a five-drop finisher in the color White. It’s an angel with 3/3 stats that puts +1/+1 counter on up to two targets upon entering the battlefield. A 3/3 Flyer is normal in Limited at Uncommon, and its ETB ability can pump up the team for a lethal attack the turn it enters or the next.