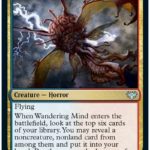 Several archetypes from MID return to Innistrad: Crimson Vow, with a couple of new themes that show potential. The allied color pairs focus on tribal themes, like zombies for UB and humans for GW. Vampires are returning to the RB archetype, along with werewolves in RG and spirits in WU.

The enemy colors are all about themes like self-mill within UG and beatdowns via attacking creatures in RW. New to Innistrad Draft is a Lifegain theme within the Black and White archetype. And the BG archetype has a toughness matters theme, as opposed to Flashback from MID.

From spirits and vampires to zombies and spells matter builds, here are the 10 MTG Limited archetypes within VOW. 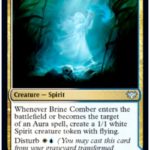 Spirits in VOW still use the Disturb mechanic like in MID, but they return as Aura Enchantments as opposed to creatures. Brine Comber is the WU archetype signpost card for Blue and White spirits, turning into Brinebound Gift upon paying its WU Disturb cost.

Zombies return to Limited in VOW using the returning MTG mechanic Exploit. Any zombie tokens created within VOW do not have the Decayed. The signpost archetype card for UB zombies is Skull Skaab.

Vampires are the focal point of the MTG Innistrad: Crimson Vow story. Unlike the vampires in MID, these vamps use the new mechanic Blood tokens. There are vampire cards that have Trample and Lifegain, along with spitting out and consuming Blood tokens. The signpost archetype card for Red and Black is Bloodtithe Harvester. 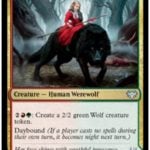 The Daybound and Nightbound mechanic returns to VOW Limited, along with a number of solid Double-Faced werewolf cards. Child of the Pack is the archetype signpost card for RG werewolves, turning into Savage Packmate at Night.

GW Humans are ready for a fight within VOW Limited, using the new MTG mechanic Training to scale in power via a go-wide creature strategy. The GW signpost archetype card is Sigardian Paladin.

WB within MID had a sacrifice theme. In VOW Limited, the colors support a Lifegain matters theme. Gaining life themes have proven strong within Limited formats before, and should once again with two powerful colors like White and Black. The WB signpost archetype card is Markov Purifier, a cleric who also synergizes with vampires.

BG has a different look within VOW than it did in MID. Toughness matters decks want creatures with a thick toughness to block creature heavy builds. The build then uses those thick backsides for offensive purposes, via cards like the BG signpost archetype, Ancient Lumberknot.

Spells matter is another returning theme within VOW Limited via the colors Blue and Red. Both colors are packed with powerful Instant and Sorcery spells, supported by the UR archetype signpost card, Wandering Mind.

Red and White are two colors within MTG that support creature builds. Put them together and you can have an Aggro-style beatdown deck that takes out your opponent before their archetype synergies come together. The RW archetype signpost card has not been revealed yet but will likely synergize with having multiple attackers, along with the Training mechanic.

Update Nov. 4 at 11am CT: Images for all entries were updated, along with VOW signpost Uncommon cards that had not been released at the time of writing.