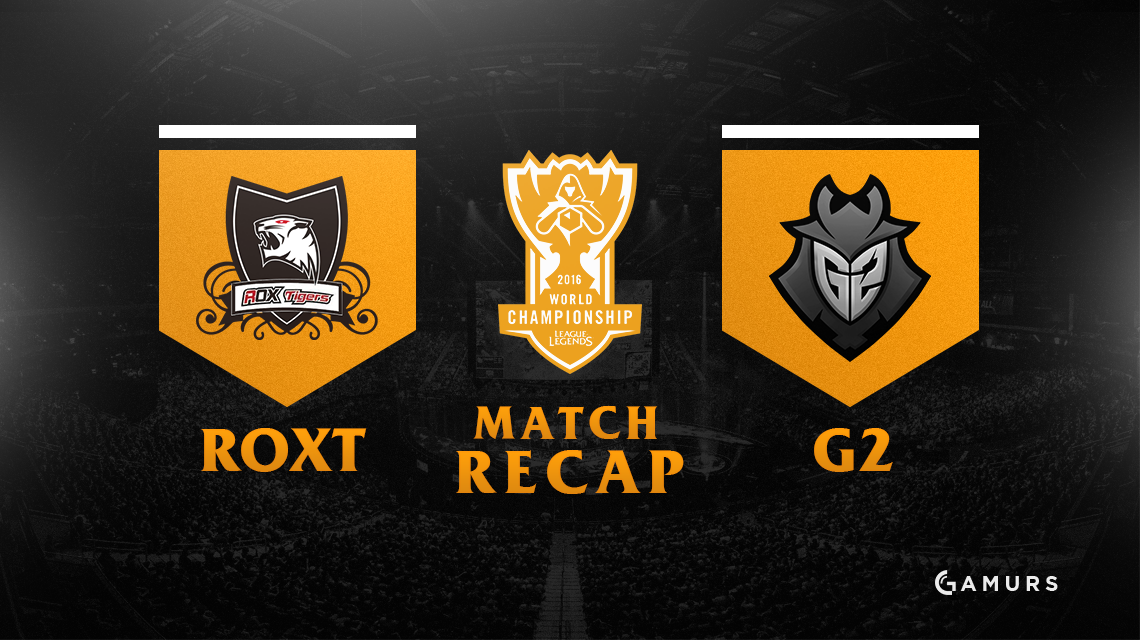 Kim “Trick” Gang-yun and the rest of G2 started off very strong, scoring three kills after succesful ganks, with two of them coming in the top lane. ROX’s first shove back came after they found Trick in the jungle, but G2 countered quickly, responding by picking off three members of ROX. At the 20 minute mark, G2 controlled the game with a lead in the kill count (6-3) and led the turrent count, taking down all of the ROX outer turrets.

Mid Game: G2 Makes a Few Mistakes, ROX Looks to Climb Back into the Game

The first drake (mountain) was taken down by ROX after finding a pick onto the G2 mid laner. Shortly after though, G2 started Baron, and looked to challenge ROX. G2 looked like they had the fight won early, with G2 finding three kills. After the fight, G2 looked back to the Baron, but ROX’s Han “Peanut” Wang-ho flashed in and stole the Baron. G2 wanted to avenge this fight and started another skirmish in the mid-lane, which they lost 3-1. Just minutes later, G2 found three members of the ROX Tigers and slowed down the bleeding.

After a short pause due to a bug with the Nocturne ultimate sound effect, ROX Tigers aced G2 thanks to a triple kill from Kennen, who used his ultimate and protobelt to do a ton of damage to G2. ROX then moved to take the Elder Dragon, Baron, and the first inhibator. A few minutes of skirmishing and then a final Baron push from ROX Tigers put the game away and moved ROX Tigers to 2-0 in groups, while G2 fell to 0-2.