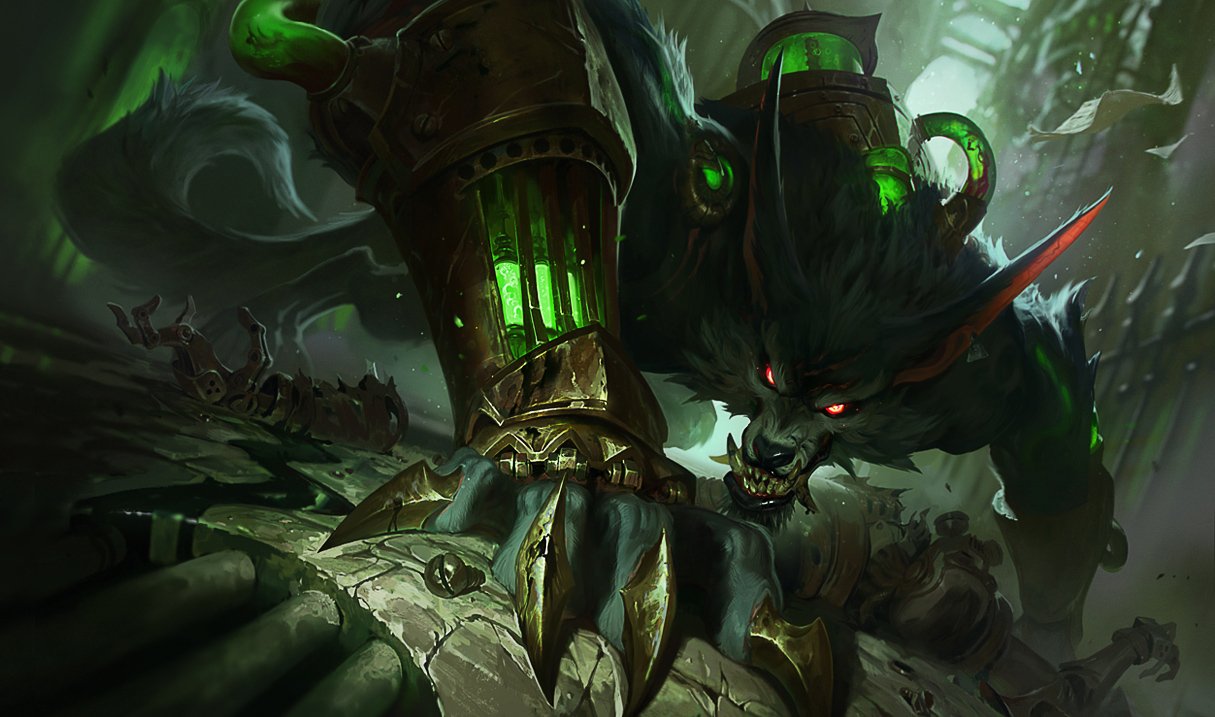 Have you ever had a nightmare of a genetically altered monster-wolf hunting you down by the scent of your blood? No? Well, you’re about to.

Like something straight out of a Stephen King novel, the new Warwick preys on the wounded, lurks in the shadows, and can get in your face to shred you up with his claws faster than you can blink.

Riot released a teaser trailer yesterday showcasing Warwick’s new terrorizing look. Today, the company has given us a sneak peek at his new skills, and they are just as fearsome as yesterday’s trailer.

We already know enough about this new kit to be scared for our lives (or at least scared for the ADC’s life).

Q: Jaws of the Beast

Warwick’s first ability, his Q, is a lunge. He leaps forward a short range at his target, fangs bared, and attacks. After the attack, Warwick lands behind his victim.

What first comes to mind is the obvious use of this skill- the leap. It allows him a short dash to stick to targets that try to run away. What’s actually more useful, however, is the positioning.

Keep in mind that in League of Legends, you cannot move through enemy champions. Warwick landing on the other side of the victim can be used to cut off escapes, or at least disrupt escape attempts.

The next ability is where Warwick really stands out. This appears to be an updated version of his old ability, Bloodscent, which we predicted would be much more important to his new kit in our article covering his reveal. Turns out we were correct.

Passively, Blood Hunt triggers when an enemy is below half of their maximum health. When attacking any target marked by this Warwick gains increased attack speed, and he gains a massive increase to movement speed when moving towards them.

When Warwick activates his W, however, things get more intense. At first, briefly, trails appear to all enemy champions, and then after the brief moment, it narrows down to only the nearest enemy champion, no matter what their health is.

When he is on the trail gained by Blood Hunt’s active, it gives him the same boons that he would gain from chasing a champion who is less than half health.

Another “terrifying” addition to Warwick’s new ability kit is his E. When he uses it, he lets out a frightening howl that applies fear to nearby enemies, forcing them to lose control and walk slowly away from him for a short duration.

There is a brief charge time for the howl, and during that time, Warwick takes reduced damage from attacks.

The mechanic of fear in League has always been a touchy subject. It was nerfed significantly over time on champions like Fiddlesticks and Nocturne. Since Warwick has plenty of mobility to get into the midst of an enemy team and then apply an AoE fear, you can safely assume that the fear either won’t last very long in duration or that it will be nerfed quickly upon release.

The pièce de résistance to Warwick’s new kit is his ultimate, which is a much more refined version of his previous ultimate ability. Instead of instantly teleporting to a nearby target, he now leaps a great distance.

Upon landing, he rips them apart with his claws. It appears that he does suppress them for a brief moment, but not nearly as long as his suppression lasts on his old ultimate. This will give him a much better chance to dive to the back line and even initiate fights for his team. The range of the leap is increased with his movement speed, and can reach intimidating lengths.

Warwick’s new kit looks like a very frightful fireworks display, sporting flashy animations and horrific noises to go with them.

Once he begins his hunt, with mobility aplenty, crowd control, and decent damage, it will be very difficult to escape his claws without the help from a teammate or two.

He will benefit most from building tanky, as shown in the teaser of his abilities where he has built a Deadman’s plate. Expect a much larger importance on ganking and chasing than on farming and dealing on-hit damage with Warwick’s new abilities.

This looks like it will be a very healthy and needed change for one of League’s oldest champions, and Summoner’s are all very excited to play him.